Georgia SoftWorks (GSW) releases the latest version of the SSH Server for Windows. Version 8.09.0001 is now available for shipping and distribution. 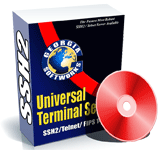 “When security is involved, it is vital to ensure that the products you are using offer the strongest authentication features available. GSW is never complacent – we continually update our algorithms so that the customer never has to worry that we are using outdated security measures

Georgia SoftWorks announces the release of their Universal Terminal Server for Windows and SSH Version 8.09.0001. The GSW UTS is excellent for use with mobile devices, RFID, RF Terminal, Bar Code scanners and other data collection in wired and wireless environments.

The UTS Configuration tool has been updated to support the new session saver methods and to support more than 1000 user profiles. The UTS setup has been modified to provide a new folder Mobile, in the install directory, containing the GSW mobile client setup programs. The gwtn_inactivity_timeout environment variable has been added, so if data is not received from a client within a specified time, then the client is terminated. This timer will take effect for all new connections that do not have a client heartbeat configured. The gwtn_serverside_heartbeat has been updated, as well, and functions identically to Server Side Heartbeat (Global), but supersedes any global setting allowing more granular control. There are also the usual documentation improvements and copyright updates.

“Where security is involved, it is essential to ensure that the products you are using offer the most current, peer reviewed, security features available,” said Steve Lindsey of GSW. “GSW is never complacent – we continually update our algorithms and products so that the customer never has to worry about using compromised security components."

Many SSH products on the market use algorithms that are outdated, deprecated or compromised and therefore unfit for commercial deployment.
Advancements in mathematics and computing power continually forces the deprecation of existing security algorithms and ciphers.
It is vital to use current, peer reviewed algorithms and ciphers to ensure data security.
Both the SSH Server and Client must use approved, safe algorithms, which Georgia SoftWorks provides.

"Nothing can replace due diligence concerning software security updates. This is where Georgia SoftWorks' products shine. We stay abreast of SSH algorithm and cryptography developments to keep our software secure and ensure that our customers are not using a cryptographic solution that has potential vulnerabilities," said Lindsey.

The SSH Shield release was launched in conjunction with the GSW Universal Terminal Server Release release. Together, they provide an easy-to-implement security plan that offers true End-to-End security.