LibertyLance, the modern decentralized gig-based marketplace for freelancers, will solve the main core issues that plague freelance sites, and is poised to be an industry disruptor, much like AirBnb and Uber have become. 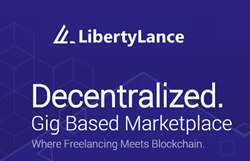 LibertyLance will be the first ever gig-based marketplace, facilitating both the client and freelancer through smart contracts, by allowing equal and fair balance on our platform.

Freelancing has been growing year over year around the Globe, yet traditional online gig-based marketplaces have 4 key compounding issues that need resolving or will it alienate the talent. Liberty Lance is here to do just that.

LibertyLance, the modern decentralized gig-based marketplace for freelancers, will solve these core issues and is poised to be an industry disruptor, much like AirBnb and Uber have become. The LibertyLance Project (https://libertylance.io/) officially launched their Private Coin Sale Tuesday March 20th and runs until March 31st , 2018, releasing their platform-backed LTN Coins, for additional funding.

Made up of a team of passionate, talented business and crytocurrency experts, blockchain programmers, marketers and developers, the LibertyLanceProject came out of a collective frustration with the current "status quo" of the freelance industry, which has a biased leaning towards the Client over the Freelancer. With over 55 million freelancers in the US alone, which makes up 35% of the U.S. workforce, LibertyLance will resolve the main underlying core problems.

Dawood Khan, CEO of LibertyLance stated "Most freelancing platforms work by having the client post a job proposal and freelancers then bid on these projects. This can create an unfair balance of power. LibertyLance, on the other hand, will be the first ever gig-based marketplace, facilitating both the client and freelancer through smart contracts, by allowing equal and fair balance on our platform."

LibertyLance's ethereum blockchain solution to the 4 main core flaws in traditional gig-based marketplaces will allow freelancers to earn more money (charged lowest fees), receive their money faster (instant payment via smart contracts), work in an environment of decentralized control while having the ability to dispute reviews, if needed, via jury review.

LibertyLance will give people who depend on the money they earn, as freelancers, to have a modern decentralized and fair platform, in which to conduct their business. All with peace of mind.

With the growing freelance industry multiplying every year, there is a strong need for a fair solution, and LiberyLance is ready to become the industry standard for gig-based marketplaces. Using smart contracts, the platform eliminates many issues, including any possibility of a central authority, non-payment and undeserving reviews on the platform.

With their revolutionary take on the freelancing industry, LibertyLance will certainly change how freelancers earn their money, as Uber and AirBnB did in their respective industries. To find out more about this up-and-coming industry disruptor (including a video and working DEMO of the platform), or more information about their Private Sale Coin Offering, please visit: https://libertylance.io.

LibertyLance is a self-regulating and decentralized gig-based marketplace designed for freelancers and clients to transact in the quickest and most transparent fashion through smart contracts. It is a revolutionary freelancing platform that uses the power of blockchain technology solving many underlying issues present in the traditional marketplaces. Using smart contracts, the platform eliminates any possibility of a central authority, non-payment and undeserving reviews on the platform.

For more information about LibertyLance, please see our website, https://libertylance.io