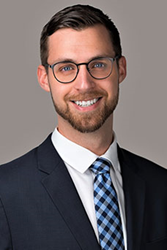 Tomasik Kotin Kasserman is proud to welcome Patrick Grim as a trial lawyer with its practice.

Tomasik Kotin Kasserman is proud to welcome Patrick Grim as a trial lawyer with its practice. Grim joined the Chicago personal injury firm as a law clerk in December 2016 before starting as an attorney in November 2017.

In his career, Grim has worked on a range of complex civil litigation matters including multi-district CTE concussion litigation against the NFL and NHL. He intends to focus his practice on cases involving wrongful death, medical malpractice, nursing home neglect, premises liability, and automobile collisions.

Grim received his juris doctor from Loyola University in Chicago in 2017. While in law school, he was a Corboy Fellow in Trial Advocacy, captain of Loyola’s nationally ranked mock trial team, and served as Executive Director of the school’s Mock Trial Board. Academically, Grim was a CALI recipient and five-time member of the school’s Dean’s List. Outside of the classroom, he taught pre-law classes at Hubbard High School on the City’s southwest side and helped coach the students to a city-wide mock trial championship.

Before moving back to Chicago to pursue a legal career, Grim worked for several years at University of Iowa Student Legal Services, developing community outreach and legal education programs. As an undergraduate, Grim served as a representative to the City Council, appeared as a panelist on CNN, and excelled academically, earning a spot on the University’s President’s List and a membership in Phi Beta Kappa honor society.

Grim continues to volunteer his time with Loyola’s Trial Advocacy Team and DePaul College Prep’s Mock Trial team. He is a member of the Illinois Trial Lawyers’ Association, American Association for Justice, Illinois State Bar Association, Chicago Bar Association, and is licensed to practice law in Illinois and before the U.S. District Court for the Northern District of Illinois.

The law firm of Tomasik Kotin Kasserman advocates for clients who have suffered personal injuries or are seeking justice for a loved one’s wrongful death. The firm has helped many clients receive multi-million dollar verdicts and settlements. To schedule an appointment or learn more about the firm, call 312-605-8800 or reach out to Patrick at pgrim@tkklaw.com.