It's fun, it's discovery, and it's hands-on engagement with flight as the nation's most extensive aviation mobile unit arrives at major events throughout America in 2018. The Experimental Aircraft Association is dedicated to growing participation in aviation by connecting with all ages through numerous activities and exhibits. 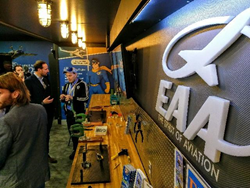 Haakon, Crown Prince of Norway (left), discusses aviation with EAA's Bret Steffen at the "Spirit of Aviation" unit's stop at the South by Southwest festival in Austin, Texas, in March 2018.

The Spirit of Aviation unit encompasses immersive activities and virtual reality experiences, giving visitors a glimpse into the world of aviation, as well as inviting them to be part of EAA’s dynamic member community.

“During our inaugural year in 2017, the Spirit of Aviation brought our passion for flight and our mission of growing participation in aviation to tens of thousands of people in a fun, engaging way,” said Dave Chaimson, EAA’s vice president of marketing and business development. “The Spirit of Aviation unit encompasses immersive activities and virtual reality experiences, giving visitors a glimpse into the world of aviation, as well as inviting them to be part of EAA’s dynamic member community.”

The Spirit of Aviation mobile unit made its first stops at the South by Southwest festival in Austin, Texas, and the Melbourne Air & Space Show in Florida earlier this month. Upcoming visits throughout the year include (tour schedule subject to change without notice):

The 53-foot unit is also a rolling billboard for EAA, including graphics highlighting a Long-EZ homebuilt aircraft and its futuristic design representing EAA’s experimental aircraft roots. It also features visibility for EAA AirVenture Oshkosh and the Young Eagles program.

“It’s fun, it’s discovery, and it’s even flying in virtual reality style,” Chaimson said. “Stop by and connect with the adventures in the world of flight. At selected locations, we are even bringing along our own Stan Lee-inspired superhero – Aviore!”

Stan Lee personally introduced Aviore to audiences last July at the EAA AirVenture Oshkosh fly-in convention in Oshkosh, Wisconsin. Aviore was created through a cooperative effort by EAA and the Stan Lee Foundation, as an inspiration to young people all over the world, encouraging them to follow their passions and find their place in the sky.

Visitors will be able to build their own Aviore gliders, supported by Flite Test, and take virtual flights with Samsung Gear VR headsets to connect with the Spirit of Aviation. There are also Redbird flight simulators for flight training experiences, hands-on building stations, and much more as part of EAA’s mission to grow participation in aviation.

About EAA
EAA embodies The Spirit of Aviation through the world’s most engaged community of aviation enthusiasts. EAA’s 210,000 members and 900 local chapters enjoy the fun and camaraderie of sharing their passion for flying, building and restoring recreational aircraft. For more information on EAA and its programs, call 800-JOIN-EAA (800-564-6322) or go to http://www.eaa.org. For continual news updates, connect with http://www.twitter.com/EAA.