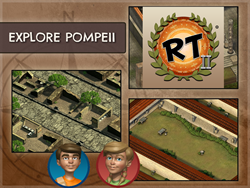 Explore Pompeii in Roman Town 2 with twins Fiona and Charlie!

Part simulation game, part puzzle game, part mystery -- and with a great variety of mini-game material thrown in -- this is an educational game that shouldn't bore kids for even a second.

Dig-It! Games announces the return of its highly-acclaimed, debut product Roman Town in the form of Roman Town 2. This modern, revitalized version of the award-winning social studies game keeps all the charm of the original while featuring updated graphics and gameplay. First releasing for iOS and HTML5, Roman Town 2 will also come to Android soon. Join Team Q on their quest to stop the devious Ladrone from stealing the artifacts of Pompeii. Take on the roles of precocious duo Fiona and Charlie to gather information and solve puzzles that will lead them to the master thief. They will need to learn all they can about life in ancient Rome to defeat her. The game is set to officially release later this month, but you can find out all about it now!

Roman Town 2 makes history come alive for students. With its basis in accurate and detailed historical information, the game allows for players to become immersed in Roman culture while being entertained by challenging puzzles. Through talking to characters around Pompeii, exploring several historical locations, and solving puzzles, players will learn all about the Roman Empire.

“History is not about fact-memorization and dates; it’s about the culture and learning how people lived in the ancient world,” said Suzi Wilczynski, CEO of Dig-It! Games. “Roman Town 2 builds on the legacy of its predecessor and fits in perfectly with our wide array of social studies-focused educational products."

To reach the end of the game, players must take on the role of both members of Team Q, tackle their unique mini-games, and collect different clues. Adventurous and fearless, Fiona likes to hurry from one challenge to the next. She loves catching looters and beating them at their own game. It’s no wonder that the games Fiona plays are timed—she’s impatient and ready for what’s coming next. On the other hand, Charlie is thoughtful and meticulous. He likes to take his time and think things through. When playing as Charlie, you’ll need to beat puzzle- and logic-based games. The activities of both characters will challenge your strategic thinking, spatial reasoning, memory, logic, mathematics, and more.

The original Roman Town released in 2010 on CD-ROM and then in 2015 for iOS. It was met with wide critical praise and several awards from prominent sources in educational technology. Among many honors, Roman Town won the 2010 Creative Child Magazine's Game of the Year, a 2015 Silver Award from the National Parenting Publication Awards, and an On for Learning Award from Common Sense Media.

"Roman Town does a fantastic job of presenting world history in a fun and entertaining context for kids," said Christopher Healy for Common Sense Media. "Part simulation game, part puzzle game, part mystery -- and with a great variety of mini-game material thrown in -- this is an educational game that shouldn't bore kids for even a second."

Roman Town 2’s completely authentic content aligns to several standards. These include National Council for the Social Studies Curriculum Standards, World History Standards, and Common Core State Standards for Language Arts and Mathematics. For educator planning a unit on the Roman Empire, this game is suitable for all kinds of curriculum. It can be played through in just a few hours, making it perfect for either homework or an in-class activity. Keep an eye out for this new social studies game coming out in April of 2018!