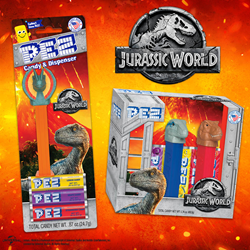 On June 1, 2018 and in anticipation of the upcoming theatrical release of Jurassic World: Fallen Kingdom, PEZ will release a Jurassic World Click & Play Gift Tin. The set will include four dispensers: Blue, T.rex, Triceratops, and Mosasaurus. Each dispenser top can be removed from its base to play along in an interactive and fun board game within each gift tin. The set also includes six Sour Blue Raspberry PEZ Candy refills. Both offerings will be available at select retailers and online at us.pez.com.

Based in Orange, CT, PEZ has been inspiring and innovating since 1927. PEZ Candy, Inc. is the pioneer of “interactive candy” that is both enjoyable to eat and fun to play with. PEZ was first marketed as a compressed peppermint candy in 1927 in Vienna, Austria. Today, the company sells and markets its products worldwide with locations in Orange, Connecticut and Traun, Austria. Between them, the two locations distribute approximately 70 million dispensers and 5 billion candies per year. PEZ products are available in more than 80 countries worldwide and are a hot collectible for adults and children alike. PEZ dispensers have been a staple of American pop culture for over 60 years. To learn more, visit us.pez.com.