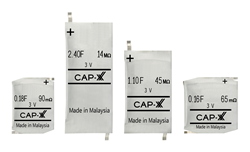 CAP-XX (LSE:CPX), a leader in supercapacitors that deliver peak power to support or replace batteries, today announced it has developed the industry’s first 3V thin, prismatic supercapacitors. The company will deploy its 3V technology first in thin prismatic form to meet demand for small, inexpensive, energy-efficient power solutions for thin wearables, key FOBs and other IoT devices. CAP-XX will then integrate the 3V technology into its larger prismatic supercapacitors, automotive modules and other products for high-energy, high-power applications.

The new 3V supercapacitors eliminate the cost and inefficiencies of the low-dropout (LDO) voltage regulator or buck converter often required to step the voltage down to work with the industry’s existing 2.7V-rated thin, prismatic supercapacitors. CAP-XX is initially targeting markets using 3V coin cell batteries, where popular batteries such as the CR2032 have reasonable energy (~220mAh) but have trouble delivering the peak power (~100mA) needed for data collection and transmission. CAP-XX can handle those power bursts, and its new 3V supercapacitors can be placed directly across the battery without the intermediary LDO.

3V supercapacitors enter production trials; samples expected August 2018 with Q2 2019 production:
To achieve the 3V, CAP-XX developed new materials and production techniques. The company has successfully tested prototypes at 3V, 70°C meeting the IEC 62391 requirement for endurance. CAP-XX has started production trials, with samples expected for customers by end of August 2018, and mass production in the first half of 2019. Pricing will start at less than US$1 in large volumes. CAP-XX will become the only manufacturer to provide a 3V supercapacitor in a thin, prismatic form factor.

Specific benefits of the 3V supercapacitors over 2.7V cells that require an LDO:

Engineers might also consider a buck converter or a buck-boost design if the current required is only marginally more, say +20%-30%, than the coin cell can provide. CAP-XX projects that its 3V supercapacitor solution will be up to 50% cheaper than such a design. CAP-XX also projects such a design will still incur significant energy losses, it won’t see the benefits of the higher currents from a 3V supercapacitor, and it will require more components.

Anthony Kongats, CAP-XX CEO, will cover the new developments in a paper he is presenting, “Using thin prismatic supercapacitors to support 3V coin cell batteries,” on 12th April, 2018 at the IDTechEx conference in Berlin.

About CAP-XX
CAP-XX (LSE:CPX) is a world leader in the design and manufacture of small supercapacitors and energy management systems used in portable and small-scale electronic devices, and large supercapacitor-based modules used in automotive and renewable energy applications. The unique feature of CAP-XX supercapacitors is their very high power density and high-energy storage capacity in space-efficient thin prismatic and compact cylindrical packages. These attributes are essential in many power-hungry applications. For more information about CAP-XX, visit http://www.cap-xx.com or email sales(at)cap-xx.com.

Voltage/current during BLE transmission. Voltage for CR2032 battery alone (brown) drops from 3.2V to 2.5V while supplying 80mA at sensor power up, vs indiscernible drop with 3V supercap due to low ESR