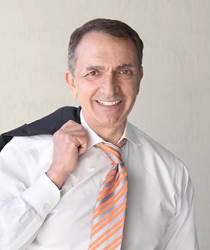 Fort Lauderdale Mayor Dean Trantalis will be the recipient of the first-ever Pride Center “Alan Schubert Award of Excellence ” at the 4th annual Diversity Honors on April 27 in Hollywood, Fla.

As a passionate public servant and outspoken leader of civil rights and equality for many years, we are delighted to celebrate him as our inaugural Pride Center award recipient.

Emceed by WSVN’s Lynn Martinez, the important celebration serves as a kick-off to Harvey Milk Day events around the world and spotlights those who are transforming lives by living authentically and advancing inclusiveness.

“Dean Trantalis’ recent elected victory in the City of Fort Lauderdale makes him the first openly gay mayor of one of the largest cities in the South,” said Robert Boo, CEO of The Pride Center at Equality Park. “As a passionate public servant and outspoken leader of civil rights and equality for many years, we are delighted to celebrate him as our inaugural Pride Center award recipient.”

Dean Trantalis was elected mayor of Fort Lauderdale in March 2018. His election represented the largest victory in city history for a candidate running for a first term as mayor.

Mayor Trantalis previously served on the City Commission representing District 2 for eight years. He was born in Norwich, Conn., and maintains a successful general law practice in Broward County.

His long track record of public service in our community began with his involvement in the fight for equal rights. As mayor, he is committed to responsible growth, community involvement in development decisions, increased fiscal responsibility in city government and the maintenance of the great quality of life in our neighborhoods.

Recognized for his leadership in our community, Mayor Trantalis has received multiple awards and honors. In spring 2015, he was an inaugural honoree of the Diversity Honors awards presented by the Harvey Milk Foundation. He also was honored as a Community Champion by the Broward County Commission and the Broward County Human Rights Board for his work on behalf of equal rights.

This collaborative effort between the Harvey Milk Foundation and The Pride Center at Equality Park, along with generous support from Seminole Hard Rock Hotel & Casino, has put South Florida on the international stage of LGBTQ rights and activism in honor of Harvey Milk, one of the first openly gay elected officials in the United States who was assassinated shortly after winning a seat on the San Francisco Board of Supervisors. This year marks the 40th anniversary of Harvey Milk’s historic service.

The celebratory evening will also see the presentation of the Harvey Milk Foundation Honors Medal award to Dolores Huerta, an iconic Latina women's rights leader, labor leader, activist and community organizer who has worked for civil rights and social justice for over 50 years.

In 1962, Huerta and Cesar Chavez founded the United Farm Workers of America. In 2002, she received the Puffin/Nation prize for Creative Citizenship which she used to establish the Dolores Huerta Foundation. DHF connects community-based organizing to state and national movements to register and educate voters; advocate for education reform; bring about infrastructure improvements in low-income communities; advocate for greater equality for the LGBT community; and create strong leadership development.

Huerta is a two-time U.S. Presidential Award Recipient; she received the Medal of Freedom Award from President Obama in 2012, the highest civilian award in the United States, and the Eleanor D. Roosevelt Human Rights Award from President Clinton in 1998. She has received many other awards including Mexico’s Order of the Aztec Eagle Award (the highest decoration awarded by the Mexican Government to foreign nationals), the James Smithson Award from the Smithsonian Institution, the Icons of the American Civil Rights Movement Award, bestowed to her in 2011 by the National Civil Rights Museum. Huerta is a U. S. Department of Labor Hall of Honor inductee and she was the first Latina inducted into the National Women’s Hall of Fame. She is a University of California Regent and has earned honorary doctorates from universities throughout the United States. Heurta’s life and work was recently documented in “DOLORES,” a critically acclaimed PBS documentary produced by Carlos Santana and directed by Peter Bratt.

The magical evening will commence with an elegant cocktail reception featuring live entertainment and an interactive balloon pop and raffle of more than 200 luxury items. Dinner will be a feast for the senses with creative cuisine at pop-up food stations plus an open bar. A memorable awards presentation will be followed by a decadent Stoli After-party with desserts, live entertainment, dancing and flowing spirits, also to be held at the Hard Rock Event Center.

Tickets are $200 per person, plus a service fee, for the black-tie optional event. To reserve tickets or for more information, please visit http://www.DiversityHonors.com.

About The Pride Center at Equality Park
Celebrating its 25th anniversary this year, The Pride Center at Equality Park has provided a welcoming, safe space – an inclusive home – that celebrates, nurtures and empowers the LGBT communities and our friends and neighbors in South Florida. The Pride Center’s programs and services meet the distinct socio-economic, health, spiritual, and safety needs of the LGBT community. It hosts more than 60 regular meeting groups each month and more than 35,000 adults and youth attend activities at the Center, each year. Outreach activities over the past year directly impacted 50,000 residents and visitors to South Florida. The Pride Center is a major site for HIV testing and prevention, education and counseling and offers holistic and comprehensive support programs for persons living with HIV/AIDS, including the nationally acclaimed PALS Project. For more information, visit http://www.pridecenterflorida.org.