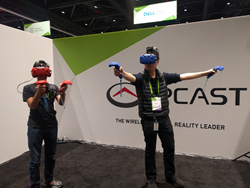 TPCAST is excited to partner with Vertigo Games and be able to showcase its Multi-User Wireless VR capabilities through Arizona Sunshine. With the TPCAST Business Edition Wireless Adapter, users can feel as if they’re truly in the virtual world of this creative, adventurous zombie apocalypse game,

Vertigo Games, developer and publisher of VR games for PC and console, and TPCAST, the leader in Wireless VR technology for PC Virtual Reality (VR) head-mounted displays (HMDs), announces the partnership between the companies. The partnership provides VR users an immersive experience with a quality title without the wire limitations. Vertigo Games developed the hit title “Arizona Sunshine” for the HTC Vive, Oculus Rift, PlayStation VR, and Window MR headsets.

The TPCAST Consumer Edition (CE) Wireless Adapter is the only PC VR Wireless Solution available in the market today and has been shipping in North America since November 2017. TPCAST technology is a breakthrough in the VR field, creating a wireless connection between the PC and the VR headset, providing VR users a unique, truly immersive experience. The TPCAST adapter has enhanced the VR user experience, providing consumers and enterprises the freedom to walk, jump, and spin without worrying about the cable.

“TPCAST is excited to partner with Vertigo Games and be able to showcase its Multi-User Wireless VR capabilities through Arizona Sunshine. With the TPCAST Business Edition Wireless Adapter, users can feel as if they’re truly in the virtual world of this creative, adventurous zombie apocalypse game,” said Tal Arad, TPCAST’s North America Marketing Manager. “Players are excited to be able to share this immersive Wireless VR experience with other players who are simultaneously in the same physical space, creating a way for users to be able to fully interact with each other without having to worry about tripping over any cables.”

TPCAST created its partners program targeting software developers that have developed VR content that exemplifies the tetherless capabilities of TPCAST’s adapter. The intentions of this partner program are to give VR creators exposure to Wireless VR, and to inspire them to create more immersive content where users can roam around, free from wires.

TPCAST strategically utilized the arcade, location-based edition of “Arizona Sunshine” to showcase the advantages of the 2-user TPCAST Wireless Adapter for HTC Vive. TPCAST demonstrated its newly released multi-user Wireless VR solution, the TPCAST Business Edition (BE) Adapter, at NVIDIA’s GTC conference, with the “Arizona Sunshine – LB VR Edition”, that enables players to walk or even run as their zombie survival skills are put to the test. The TPCAST BE Adapter simultaneously supports two to four users, while preserving the HTC Vive’s high video quality and maintaining the latency under 2ms.

“Arizona Sunshine – LB VR Edition”, based on the award-winning and top-selling VR shooter, offers an untethered warehouse-scale VR experience that transports four players into the heart of a zombie apocalypse. Exploring freely through real-world movement, players create their ultimate weapon loadout from a wide range of VR peripherals and jump guns blazing into the “Arizona Sunshine” universe. This is the most immersive zombie apocalypse experience yet. For more details, visit: http://arizona-sunshine.com/ or contact: press(at)vertigo-games(dot)com

About TPCAST:
Creator of the first commercial wireless virtual reality solution, TPCAST’s vision is to unleash the VR world by making the VR/AR/MR HMDs wireless. The company’s patent-pending technologies enable highly efficient bi-directional communications between the PC and the VR HMD with near zero latency. TPCAST's mission is to work with the VR industry ECO partners including HMD manufacturers, game developers, content providers, GPU makers, and key VR technology providers to deliver the best wireless VR experience to consumers and enterprise users. http://www.tpcastvr.com