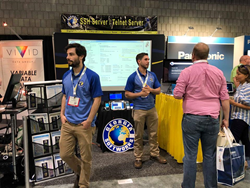 Our biggest hit of the show was our latest product, the GSW ConnectBot, which is an industrial grade SSH/Telnet Client for Android. It’s a solution that many companies have been looking for and were thrilled to see that we now offer

Last week, Georgia SoftWorks (GSW) showcased their products at Modex 2018, one of the largest supply chain equipment, technologies and manufacturing trade shows. The GSW Team had demonstrations on devices for their GSW Telnet Server for Windows, SSH Server for Windows, Business Tunnel, and their latest product, the GSW ConnectBot – an SSH/Telnet Client for Android.

“Modex was a great experience for Georgia SoftWorks,” said Johnny Douglas of Georgia SoftWorks. “Our software is used frequently in the supply chain industry. We were able to strengthen relationships with our current customers and partners, as well as network and create new contacts with new businesses.”

Located at the Georgia World Congress Center in Atlanta, Georgia, Modex provides networking with professionals in the manufacturing, distribution and supply chain industries. Attendees include executives in the related fields, manufacturing and production managers, IT, logistics and supply chain directors, warehouse managers and more.

“Our biggest hit of the show was our latest product, the GSW ConnectBot, which is an industrial grade SSH/Telnet Client for Android. It’s a solution that many companies have been looking for and were thrilled to see that we now offer,” said Douglas.

The Georgia SoftWorks ConnectBot is the most cryptographically secure, commercially supported Telnet/SSH client for Android, on par only with the GW SSH Clients for Windows. The GSW ConnectBot’s features include running multiple SSH sessions at a time, persisted sessions when the user switches to another Android app, compatibility with a wide variety of hosts, configurable Answerback, configurable screen size and more. The GSW ConnectBot includes updated SAFE algorithms for 2018 with ciphers that have no known security vulnerabilities or weaknesses. The GSW ConnectBot offers the strongest encryption available on the commercial market.

Georgia SoftWorks is a software development company located in Dawsonville, GA (USA) and has received global recognition for its development of the industrial grade GSW Telnet Server for Windows and SSH Server for Windows. The GSW software is used in thousands of data collection environments around the world, making them a great fit for the networking that Modex offers. GSW has end users and resellers on every continent except Antarctica.