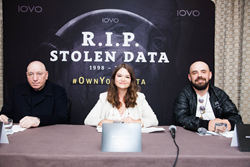 During her speech, Kaiser mentioned that an emerging blockchain-based technology, IOVO, has the potential to fix the problem with online data, one that the whole world is now talking about, but nobody knows how to resolve it. IOVO is a game changer in this field.

IOVO, the first decentralized human value network, yesterday announced during a press conference in New York City that Brittany Kaiser, former business development director at Cambridge Analytics, has joined IOVO’s data democracy movement as an advisory board member, to give individuals the liberty to manage and monetize all of their digital records. The event’s focus was on the issues of data ownership and stealth, and the prevention of personal information leaks and data abuse. Jeffrey Wernick, a well-known investor in Uber and Airbnb also declared his support for the project.

During the conference Kaiser, now co-founder of Digital Asset Trade Association (DATA), made it clear that data ownership in the digital economy is a human right that must be protected. “If we don’t act now on digital freedom, our kids will not know what privacy is. The current system is corrupted and twisted in its foundations. Corporations put a lot of effort to monitor our online activity, gather as much personal information as possible, and monetize our data behind our backs making millions,” she said.

During her speech, Kaiser mentioned that this abuse can be stopped, pointing to an emerging blockchain-based technology, IOVO. “IOVO has the potential to fix the problem with online data, one that the whole world is now talking about, but nobody knows how to resolve it. IOVO is a game changer in this field.”

The IOVO solution is a universal, global database-network formed on DAG (directed acyclic graph), which represents the next generation of blockchain, serving as a data management and scoring ledger. IOVO is a base layer for different decentralized social and commercial applications and can be integrated with existing services. What’s even more interesting, is that it democratizes the monetization of data, allowing private users and companies to decide what is revealed via their personal data wallet and on what terms. Every user decides how much of their information is made accessible to other parties while keeping complete control over it. Each browsing action and each query requires payment, giving a data owner a permanent stream of income. On the IOVO DAG, no data changes hands without multilateral agreement and proper payment. The fact that it is based on the fourth generation of blockchain and advanced cryptography makes it extremely safe and secure.

“Digital transformation and social media turned the internet into wild west. Big Data is great, but when we think about it, data warehouses and big players make money by depriving us of our privacy. It takes place behind our backs and until now we had no means to stop it. The problem with invasive data collection and it’s out of control distribution was caused by technology and can also be fixed by technology,” said IOVO founder Krzysztof Gagacki. “IOVO is a game changer in this field. Our goal is to make the internet a fair place, in which monetization of data is democratized, controlled and transparent. Let's take back what's rightfully ours - the right to own our data, manage it and get paid for it.”

The IOVO universal global database-network is still undergoing coding but will soon be ready for testing. For more information, visit: http://www.iovo.io.

About IOVO
IOVO is a Directed Acyclic Graph (DAG) designed as a platform for various applications. The primary characteristic of IOVO is collecting and storing users’ data coming from applications built upon and based on the IOVO decentralized network with no access possibility of other users/entities access without particular user’s consent. If the users agree upon accessing their statistics, they receive agreed remuneration (fee). Users decide how much of their data is made externally accessible to other parties, while keeping complete control over it. Each browsing action and each query requires a payment. IOVO serves as a personal data wallet. It builds a powerful universal database that allows unrestricted analysis opportunities. The new economy proposed by IOVO is an infrastructure allowing users to monetize their data that until now brought benefits to owners of platforms and applications only. For more information, visit: http://www.iovo.io.