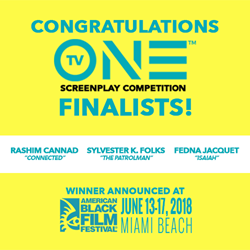 The three finalists of the TV One competition will receive an all-expense paid trip to this year’s ABFF in Miami (June 13-17). During ABFF’s TV One “Celebrity Scene Stealers” event on Friday, June 15, each finalist will direct a table read of a scene from their script, performed by professional actors participating in this year’s festival in front of a live audience. A brief overview of the TV One Screenplay Competition finalists scripts are as follows:

This year’s winner will be announced at the ABFF Filmmaker Ceremony on Saturday, June 16. The winner will earn a $5,000 cash prize and an opportunity to have their screenplay produced into an original, made-for-TV movie, which will debut in 2019 on TV One and at the 23rd Annual American Black Film Festival.

Screenwriter and TV One’s 2017 ABFF Screenplay Competition finalist Timothy Folsome will debut his original film, Down for Whatever, during this year’s festival on Thursday, June 14 at The Colony Theatre (1040 Lincoln Road Miami Beach, FL 33139) at 2:30 p.m. The film is slated to premiere on TV One on Sunday, July 22 at 7 p.m.

In the film Down for Whatever, A young female doctor who works at a prestigious hospital learns that her newly-found biological teen sisters are ruthless cop killers that her detective husband is hunting down. The film stars two-time Grammy Award-winning actress and singer LeToya Luckett as Tracy, Calesha “Bre-Z” Murray (Empire) as Denise, Imani Hakim (Everybody Hates Chris) as Sonya and Hosea Sanchez (The Game) as Mike.

For more information about the ABFF TV One Screenplay Competition and TV One’s upcoming programming, visit http://www.abff.com and the network’s companion website at http://www.tvone.tv. TV One viewers can also join the conversation by connecting via social media on Twitter, Instagram and Facebook (@tvonetv) using the hash tags #Represent and #ABFF18, and catch clips and promos on TV One’s YouTube Channel.

ABOUT THE AMERICAN BLACK FILM FESTIVAL:
The American Black Film Festival (ABFF) is an annual event dedicated to showcasing quality film and television content by and about people of African descent. It supports emerging artists to foster a wider range of images, stories and storytellers represented in the entertainment industry. The festival is committed to the belief that Black artists and content creators deserve the same opportunities as their mainstream counterparts. ABFF founder Jeff Friday conceived the festival in 1997 as a vehicle to promote diversity in the motion picture industry, and strengthen the Black filmmaking community through resource sharing, education, artistic collaboration and career development. Today, the ABFF is recognized as the preeminent pipeline to new Black talent, both in front of and behind the camera, and is regarded as one of the leading film festivals in the world. The ABFF is a property of ABFF Ventures, a multifaceted entertainment company specializing in the production of live events, television and digital content targeted to upscale African American audiences.

ABOUT TV ONE:
Launched in January 2004, TV One serves 59 million households, offering a broad range of real-life and entertainment-focused original programming, classic series, movies and music designed to entertain and inform a diverse audience of adult black viewers. The network represents the best in black culture and entertainment with fan favorite shows Unsung, Rickey Smiley For Real, Fatal Attraction, and The NAACP Image Awards. In addition, TV One is the cable home of blockbuster drama Empire. In December 2008, the company launched TV One High Def, which now serves 14 million households. TV One is solely owned by Urban One, Inc., formerly known as Radio One, Inc. [NASDAQ: UONE and UONEK, http://www.urban1.com , the largest African-American owned multi-media company primarily targeting Black and urban audiences.

CAST AVAILABLE FOR INTERVIEWS UPON REQUEST