Acclaimed actor, singer, and dancer joins a star-studded advisory board to nominate 2018 recipient of the Burton Moss Hollywood Golden Era Award named for one of the most respected talented agents of Hollywood’s “Golden Age.” 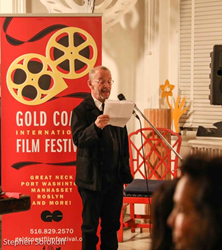 “Budd Moss is a great friend of mine whose sincere passion for the movies, and the great professionals whose work lit up the screen will now be memorialized in the Burton Moss Hollywood Golden Era Award, presented each year by the Gold Coast International Film Festival,” stated Mr. Grey.

Named for the man who has represented some of Hollywood’s finest stars, the Burton Moss Hollywood Golden Era Award pays tribute to film legends who may not have been appropriately honored during their lifetimes, and whose legacy is in danger of becoming forgotten by newer generations of filmgoers. The recipient and presentation of the 2018 Burton Moss Hollywood Golden Era Award are expected to be announced at a later date.

Mr. Grey stated, “Budd Moss is a great friend of mine whose sincere passion for the movies, and the great professionals whose work lit up the screen will now be memorialized in the Burton Moss Hollywood Golden Era Award, presented each year by the Gold Coast International Film Festival.”

“The Burton Moss Hollywood Golden Era Award helps preserve the legacy of the ‘Golden Age’ of Hollywood, and spotlight the stars who made it great," said Ms. Gil. “There are so many accomplished and talented actors from that era whose legacy is in danger of becoming a mere footnote in history, and we hope that this recognition will keep those legacies alive.”

The Burton Moss Hollywood Golden Era Award, itself an original work of art, was created by renowned sculptor Edwina Sandys, who is a granddaughter of Sir Winston Churchill. The first award was accepted by Hayworth’s daughter, Princess Yasmin Aga Khan, at a presentation made at a reception held at the New York City loft home of Ms. Sandys. Among the guests were Oscar and Tony Award winner Grey, who introduced Budd Burton Moss. Also in attendance were Louise Lasser, Richard Thomas, Mrs. Anthony Quinn, James Nederlander, Jean Doumanian, Carole Shelley, Laura Pels, and Greg Mullavey.

The Arts Center established its Gold Coast Cinema Series in 1995 and features films followed by an interactive dialogue between the audience and members of the cast, director, producer, film critics, or other prominent industry insiders. The success of the Gold Coast Cinema Series laid the groundwork for the first-ever Gold Coast International Film Festival, which opened with acclaim in 2011 and featured actor Bruce Dern sharing a film and speaking among 400 people in attendance.

Subsequent Gold Coast International Film Festivals have welcomed such notable actors as Edward Burns, who took “selfies” with more than 300 fans at a preview screening of his film, Long Islander Isabella Rossellini shared her experiences as an actor and director, as talking about her famous parents, Ingrid Bergman and Roberto Rossellini. Hofstra University alumni Francis Ford Coppola, who went to high school in Great Neck, spoke movingly at a tribute hosted in his honor, and Baz Luhrmann appropriately brought his film The Great Gatsby to the place where it all began, the storied Gold Coast of Long Island.

About the Gold Coast Arts Center
The Gold Coast Arts Center is a 501(c)(3) organization dedicated to promoting the arts through education, exhibition, performance and outreach. Located on the North Shore of Long Island, it has brought the arts to tens of thousands of people throughout the region for over 20 years. Among the Center’s offerings are its School for the Arts, which holds year-round classes in visual and performing arts for students of all ages and abilities; a free public art gallery; a concert and lecture series; film screenings and discussions; the annual Gold Coast International Film Festival; and initiatives that focus on senior citizens and underserved communities. These initiatives include artist residencies, after-school programs, school assemblies, teacher-training workshops and parent-child workshops. The Gold Coast Arts Center is an affiliate of the John F. Kennedy Center for the Performing Arts Partners in Education program, and the National Gallery of Art in Washington, D.C. More information can be found at http://www.goldcoastarts.org.