A study by PsychTests.com reveals that while extreme optimists may sometimes have their heads in the clouds, pessimists aren’t necessarily conscientious and may have the potential to be a little reckless. 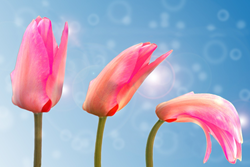 While optimists, realists, and pessimists each have their strengths and weaknesses, optimists tend to fare better.

The best approach to life would be to have the positive attitude of an optimist, but the practical sensibility of a realist.

Perpetual Pollyannas are often viewed as airy, naïve, and even foolhardy. In fact, at least some research studies have highlighted the potential pitfalls of an extremely optimistic attitude, including a propensity to underestimate health hazards and even a tendency toward narcissism. Pessimists, on the other hand, are often painted as melancholic and cynical, but also excessively vigilant. Then there are the realists, said to possess the best of both worlds. In terms of which outlook has the most advantages, research from PsychTests indicates that optimists still come out on top.

Analyzing data from 8,933 people who took PsychTests’ Happiness Test, researchers divided the sample into three groups: Optimists, Realists, and Pessimists. According to PsychTests’ study, here is where they differ:

Able to find the silver lining in bad situations

Believe that nothing can be learned from failure

Refuse to give up even when life gets tough

Believe in the importance of maintaining a sense of humor

Approach a problem by looking at it from different angles

Satisfied with their personal relationships

Often experience a sense of loneliness

On the one hand, some optimists can be risk-takers, even to the point of being a little reckless. For example, PsychTests’ study reveals that:

In terms of tendencies toward reckless behavior in pessimists, PsychTests’ study also reveals that, surprisingly, not all pessimists live up to their supposedly cautious nature:

“Realists have the ability to see both the good and the bad, the possibilities and the risks,” explains Dr. Jerabek, president of PsychTests. “This is often considered the ‘smartest’ outlook, because a realist will plan for the worst but hope for the best. This doesn’t mean, however, that all optimists are clueless and reckless. Our research has shown that even those who always look on the bright side of life are not oblivious to the darkness. They recognize that life can be filled with trials and tribulations…they just hold onto the hope that one day, things will get better. And while it is true that some optimists can display a sense of invincibility, our research shows that even pessimists can be foolhardy, and sometimes even more than optimists. The bottom line is, when it comes to dealing with life’s ups and downs and overall sense of contentment, optimists are more likely to thrive. Taking all things into consideration, we feel the best approach to life would be to have the positive attitude of an optimist, but the practical sensibility of a realist.”

Are you an optimist, pessimist, or realist? Find out https://testyourself.psychtests.com/testid/2114