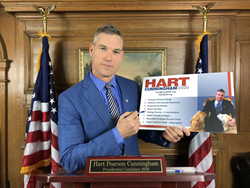 It’s not too late for Americans to wake up and fight these inequalities.

More than 40 million Americans live in poverty, according to the 2016 US Census. Put in perspective, the collective wealth of 50% of the US population isn’t as much as that of just three men - Microsoft co-founder Bill Gates, Amazon founder Jeff Bezos, and Berkshire Hathaway CEO Warren Buffett.

The case can be made that the American Dream has turned into a nightmare. Still, it’s not too late for Americans to wake up and fight these inequalities.

In a recent video release from 2020 presidential candidate Hart Cunningham, the candidate railed against the .1%, who are “doing whatever they can to remove jobs from American citizens. They have no care about what’s happening to our planet, to our society, to middle-income wages.” Cunningham committed himself to ending economic inequality through “a new deal.”

Specifically, Cunningham called for “budgetary initiatives for the lowest economic class,” lowering tax brackets that would allow for and empower lower and middle-class Americans to “provide for their children and family, so that they can have stronger family values and spend more than 30 minutes of the day with their child.”

With the proper leadership in place, the “basics of the American Dream” could be restored.

The current president, elected on a campaign promise to “Make America Great Again,” instead called for a tax plan through which “over 60 percent… would flow to the richest 1 percent after 10 years — nearly 40 percent to the top 0.1 percent.” The same tax plans cuts “trillions of dollars from services for working-class families,” reported The Hill.

Harkening back to his own youth, Cunningham recalled a time when “American citizens had a dream, the middle class had savings, and they looked at opportunities for their children.”

To truly make America great again, preferential treatment to the uber rich will need to end. Thankfully, there are now more ways than ever before for lower and middle-class citizens to take matters into their own hands, re-making America into a country where wealth inequality is decreasing, and the quality of life is great for everyone.