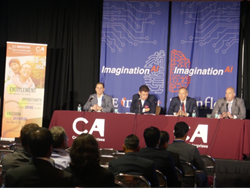 "Many people we met at this conference are anxious about either their own or a family member’s or friend’s immigration status being scrutinized under the current immigration regime," says CanAm’s President and CEO Tom Rosenfeld.

CanAm Enterprises was proud to be the sponsor for TiE Inflect Conference in early May. TiE Inflect (formerly known as TiEcon), hosted by TiE Silicon Valley, is the largest technology-anchored conference dedicated to fostering entrepreneurship. TiEcon was ranked alongside Demo, TED and World Economic Forum as one of the top 10 conferences worldwide for ideas and entrepreneurship by Worth magazine. In the past, TiEcon attracted over 60,000 entrepreneurs and professionals from over 50 countries. For the first time in its 27-year history, this year’s TiE Silicon Valley Conference presented a Global Connect track, focusing on immigration options for entrepreneurs.

CanAm, which hosted the GlobalConnect Visa track at the conference, invited some of the most prominent immigration attorneys to discuss how President Trump's "Hire American" executive order is affecting tech worker visas. This track included a comprehensive analysis of suitable visa options for technology professionals and entrepreneurs as well as a discussion of the EB-5 immigrant investor program visa requirements, process and benefits for eligible foreign nationals seeking a path to permanent residency that H1-B does not afford.

CanAm’s President and CEO Tom Rosenfeld said, “Many people we met at this conference are anxious about either their own or a family member’s or friend’s immigration status being scrutinized under the current immigration regime,” said Rosenfeld, “Everyone I met reinforced the importance of being educated on EB-5 as a potential compelling alternative to an H-1B Visa."

About CanAm Enterprises
With three decades of experience promoting immigration-linked investments in the United States and Canada, CanAm has a long and established track record. Based on a reputation of credibility and trust, CanAm has financed 53 project loans and raised more than $2.6 billion in EB-5 investments. CanAm exclusively operates several USCIS-designated regional centers that are located in the city of Philadelphia, the Commonwealth of Pennsylvania, the county of Los Angeles, the metropolitan region of New York, the state of Hawaii, Florida and Texas.