Recent release “The Black Dolphin of Atlantis” from Page Publishing author Peter Andras Deme is an evocative tale of love, despair, and salvation on the spectacular California coast. 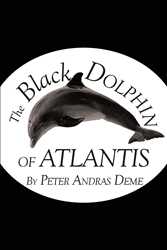 Peter Andras Deme, a San Francisco resident who escaped communist Czechoslovakia in 1966, served in the US Army, pursued degrees from American University and Georgetown University, and became a US citizen in 1977, has completed his book “The Black Dolphin of Atlantis”: an engrossing story centered around the protagonist’s love for his dog, Rosemary, whose death provoked a dramatic emotional breakdown. A surreal and magnificent encounter in a secluded cove changes the course of his life forever.

Peter shares, “When the black thing swam closer to my ledge, most likely attracted by the fire, I realized that it was not a seal, but a dolphin.

"First, I said to myself, ‘Oh no. Another competitor for the fish in my lagoon.’ But then, as she swam closer to me, I heard her whistling and barking like a puppy dog. I could also see her beautiful green eyes smiling at me.

"So, I thought, what the hell, and tossed her one of my fish. She took it and then came even closer, whistling and barking at me again. At that moment, a strong deep feeling rushed through my mind and heart.

"After being at sea for months without any human contact, since sailing out under the Golden Gate Bridge, I realized that this black dolphin was more than just an animal. This dolphin was a fellow thinking being.

"Although I left San Francisco originally to search for solitude, to be alone forever, following my separation from my wife and son, and following the death of my beloved dog, Rosemary, this dolphin, in a few minutes, proved me wrong. Letting me know how much I really needed companionship. And how wrong I was believing that only solitude can cure, or at least make bearable, the pain I felt after losing

"Rosemary, my beautiful, faithful black Labrador friend for thirteen and a half years.

"This black dolphin with her smiling green eyes and her friendly chatter suddenly gave me the reason to live and to love.”

Published by New York City-based Page Publishing, Peter Andras Deme’s book is a powerful story of interspecies connection and a love that transcends time and space.

Readers who wish to experience this compelling work can purchase “The Black Dolphin of Atlantis” at bookstores everywhere, or online at the Apple iTunes store, Amazon, Google Play, or Barnes and Noble.