Windstar’s new soft-expedition-style cruising gets guests onto the water right from their small ship, up close and personal with Alaska’s wildlife and pristine natural habitats. 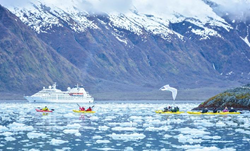 We are thrilled to finally be back in Alaska having just launched our Signature Expeditions that embraces the natural beauty of the region, and allows for the most authentic, destination-focused experiences for our guests. ~ Windstar President John Delaney

Seattle-based Windstar Cruises’ 212-passenger all-suite Star Legend is now sailing in Alaska through August, launching the small ship line’s first endeavor into expedition cruising, with a kick off in Kenai Fjords National Park on May 18, this cruise marks a return to Alaska for the award-winning travel company after a 20-year hiatus from the region.

“We are thrilled to finally be back in Alaska having just launched our Signature Expeditions that embraces the natural beauty of the region, and allows for the most authentic, destination-focused experiences for our guests,” commented Windstar President John Delaney.

Windstar offers a new, active and elegant choice for travelers, with its boutique brand of small ship cruising and experiential travel, including newly-announced Signature Expeditions, which take guests on zodiac and kayaking adventures on Alaska’s rugged natural coastline and gets guests closer, shows them more, and sends them home with once-in-a-lifetime photos and memories. The highly skilled and knowledgeable Signature Expeditions Team lead tours aboard rigid inflatable watercraft and expedition kayaks, as well as guiding guests on scenic hikes. The Official Cruise Line of the James Beard Foundation, guests will delight in the abundance of local seafood specialties on board and on small group tours ashore.

The ship arrived in Seward (Anchorage) for its maiden cruise in Alaska on May 17 and is currently on a 14-day itinerary that visits Kenai Fjords National Park, Sitka, Juneau, Icy Strait Point (Hoohnah), Haines, Tracy Arm and Endicott Arm, Wrangell, Misty Fjords, Metlakatla, Ketchikan, and in British Columbia – Prince Rupert, scenic cruising of the Grenville Channel and Inside Passage, ending on May 31 in Vancouver, BC, marking its first arrival to that homeport for the season. Star Legend will sail on numerous cruises roundtrip from Vancouver and between Seward, AK and Vancouver, BC throughout the 2018 Alaska season. The ship will also make a special one-day visit to Seattle on June 27 for a special event on Lake Union, including a Zodiac naming ceremony.

For more images of Windstar’s first few days in Alaska, including the debut of its new Signature Expeditions, please contact Mary Schimmelman, Windstar Cruises Director of Public Relations at Mary.Schimmelman(at)windstarcruises.com, 206-733-2970. Photos will be posted also on Windstar’s Facebook Page.

Cruisers can choose from more than 25 different departure dates in 2018 and 2019 for small ship cruises and cruise/land tours to Alaska. Visit Windstar Cruises online, call 1-877-958-7718 or email info(at)windstarcruises.com for more information on the cruise line, Alaska Cruises and Star Legend ship.

Windstar Cruises operates a six-ship fleet of small sailing and all-suite ships visiting approximately 270 ports annually sailing throughout Europe, the Caribbean, Costa Rica and the Panama Canal, Asia, Alaska and British Columbia, Canada and New England, and cruising year-round in Tahiti. Windstar’s fleet is the market leader in small ship cruising with a total of 1,242 passenger berths calling on off-the-beaten-path and popular ports in more than 60 countries. The boutique cruise line carries 148 to 310 passengers on six small ships and takes travelers on cruises that are 180 degrees from ordinary. Windstar is known for immersive experiences and destination authenticity, port-intensive itineraries, exceptional award-winning service, and an innovative culinary program with culinary-themed cruise as the Official Cruise Line of the James Beard Foundation. Windstar Cruises is a part of Xanterra Travel Collection, an award-winning, globally diversified travel company offering once in a lifetime experiences in some of the most beautiful and iconic places on earth.