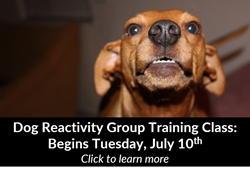 “Most dog owners want to bring their dog with them on walks, to the park, to sit on patios, really anywhere that is dog-friendly. But they don’t feel like they can do that if their dog is overreacting to every dog that walks by." Scott Sheaffer, Dog Behavior Expert

Park Cities Pet Sitter has announced a new group dog training class specifically targeted to owners of dogs with dog reactivity. The class will be held beginning Tuesday, July 10th from 6:30pm-7:30pm, and will meet for four consecutive weeks. The class will be held at the Park Cities Pet Sitter corporate offices, which are located at 5831 McCommas Blvd in Dallas. Cost for the class is $215 and will be taught by renowned dog behavior expert, Scott Sheaffer, CDBC, CPDT-KA. The class is considered semi-private, with a maximum of 6 attendees being allowed to enroll.

Dog reactivity is often seen when dogs overact to certain stimuli, like seeing another dog while out on a walk. Fear is typically the reason for a dog’s reactivity, which can be a result of many factors, including genetics, a single bad experience in their past, or a lack of proper socialization. Dog owners often see dog reactivity manifest in situations like this:

During the four weeks of Park Cities Pet Sitter’s Dog Reactivity class, attendees will learn what is causing their dog’s reactivity, how to safely manage it, be provided with a list of recommended tools, in addition to learning handling techniques that will help minimize their dog’s reactivity over time. Class attendees are asked not to bring their own dog to the class, though one student’s dog will be chosen after the first class to be used for demonstration purposes in later classes. The class is not intended for owners with dogs that have human fear or aggression, or for owners that may be seeing aggressive behavior between two or more dogs in their household.

Trainer Scott Sheaffer is an expert in treating dog-to-human and dog-to-dog aggression cases, but says that dog-to-dog reactivity is the most commonly seen issue he is asked to evaluate and treat. It is why he believes group training classes that address dog reactivity like the one he is leading beginning July 10th are so important and needed.

“Having a dog that overreacts to other dogs while out with its owner fundamentally impacts the dog-owner bond,” says Sheaffer. “Most dog owners want to bring their dog with them on walks, to the park, to sit on patios, really anywhere that is dog-friendly. But they don’t feel like they can do that if their dog is overreacting to every dog that walks by. I am confident that by taking this group training class that attendees will see a noticeable improvement in their dog’s behavior issues on future outings if the exercises they learn are done as prescribed over the coming weeks and months. It is incredibly satisfying to witness the dog and owner transformations that can occur after learning and practicing the material we will cover, and to know that their relationship will be improved moving forward.”

About Park Cities Pet Sitter: PCPSI has served the Dallas, Richardson and Plano areas 7 days a week, 365 days a year since 1992, and was recently named the 2017 Business of the Year by the National Association of Professional Pet Sitters. Dog walking, pet sitting, pet taxis, overnight sitting, pet supply shopping, and dog training are some of the many services PCPSI offers. Park Cities Pet Sitter is bonded and insured, and all sitters are employees--not independent contractors. A manager is on-call 24 hours a day to handle any emergencies. Go to http://www.pcpsi.com to learn more.