The airframe of the 1940s long-distance fighter aircraft was discovered on an Ohio farm a decade ago. That started a 10-year restoration project that included a worldwide search for parts to restore the only flying version of this remarkable military aircraft. 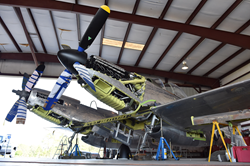 The restoration of the North American XP-82 is nearing completion in Georgia, with a goal of flying the aircraft at Oshkosh this summer.

There is no better place than Oshkosh to make the first public flights of this aircraft, which is why it is our intent to complete the restoration and testing so we can be a part of AirVenture 2018.

The restorers of a North American XP-82 “Twin Mustang,” one of the most unusual fighter/escort aircraft ever deployed by the U.S. military, are aiming to make EAA AirVenture Oshkosh 2018 its first public appearance to celebrate completion of an arduous 10-year restoration project.

The 66th annual Experimental Aircraft Association fly-in convention is July 23-29 at Wittman Regional Airport in Oshkosh, Wisconsin. The event is the world’s largest annual gathering of vintage warbird aircraft, with more than 300 participating each year among the 10,000 airplanes that arrive in the region for the event.

The 10-year restoration project in Douglas, Georgia, began after aircraft restorer Tom Reilly discovered the complete airframe on a farm in Ohio. Reilly then scoured the earth seeking engines, propellers and a multitude of other XP-82 parts to continue the restoration.

“The interest and enthusiasm for this restoration has been wonderful and gratifying,” said Reilly, who has chronicled the restoration process online. “There is no better place than Oshkosh to make the first public flights of this aircraft, which is why it is our intent to complete the restoration and testing so we can be a part of AirVenture 2018.”

The XP-82 restoration brings back a unique flying example of an aircraft designed late in World War II as a long-range fighter escort to accompany B-29 bombers for thousands of miles on missions over the Pacific Ocean. Based on the highly successful P-51 “Mustang” design, the XP-82 used twin fuselages and two specially designed Rolls-Royce Packard-built Merlin engines to supply the speed, range and armament needed for the task. Fewer than 300 of the airplanes were produced as the P-82, with all but five scrapped in the years after the Korean War as the military moved to jet aircraft.

“It has been decades since people have seen this aircraft type fly anywhere,” said Rick Larsen, EAA’s vice president of communities and member programs, who coordinates AirVenture features and attractions. “The return of this historic aircraft to the sky is a tribute to the vision and perseverance of the restoration team, and it’s fitting that the group has AirVenture as a goal to fly this beauty before a huge, appreciative audience.”