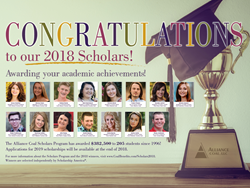 We congratulate our 15 new scholarship recipients on their successes and are proud to support them in building their futures.

Alliance Coal Scholars are employees’ sons and daughters pursuing postsecondary education in college and vocational school programs. The program recognizes not only their academic achievements but also their contributions to the community and leadership in school activities.

“Alliance Coal welcomes this opportunity to salute these remarkable students, their parents, and teachers,” said Paul Mackey, Vice President, Employee Health and Benefits. “We congratulate our 15 new scholarship recipients on their successes and are proud to support them in building their futures.”

The scholars receiving $1,000 awards are:

The Alliance Coal Scholars Program supports excellence in teaching through its Alliance Coal Teacher Achievement Awards. Each of the top five scholarship recipients selects an elementary, junior-high, or senior-high teacher for the $500 award.

ARLP is a diversified producer and marketer of coal to major United States utilities and industrial users. ARLP, the nation’s first publicly traded master limited partnership involved in the production and marketing of coal, is currently the second largest coal producer in the eastern United States with mining operations in the Illinois Basin and Appalachian coal producing regions.

ARLP currently operates eight mining complexes in Illinois, Indiana, Kentucky, Maryland, and West Virginia as well as a coal loading terminal on the Ohio River at Mount Vernon, Indiana. ARLP also generates income from a variety of other sources, including investments in oil and gas mineral interests and gas compression services.

News, unit prices, and additional information about ARLP, including filings with the Securities and Exchange Commission, are available at http://www.arlp.com. For more information, contact the investor relations department of Alliance Resource Partners, L.P. at (918) 295-7674 or via email at investorrelations@arlp.com.