UNA-USA, a program of the United Nations Foundation, awards foreign affairs Congressional champion, Chairman Royce, during the largest-ever gathering in D.C. of Americans advocating for strong U.S. leadership in the UN 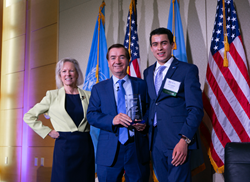 “Rep. Ed Royce has embodied the spirit of bipartisan global leadership that is essential for advancing our country’s interests and values worldwide." - Chris Whatley, Executive Director of UNA-USA.

During its leadership summit with over 600 Americans gathered to support strong U.S. engagement at the United Nations, the United Nations Association of the United States (UNA-USA) awarded the Honorable Ed Royce, Chairman of the U.S. House Foreign Affairs Committee, the 2018 Congressional Leadership Award. The award recognizes his 25-year leadership in championing development in Africa, including his sponsorship of the Africa Growth and the Development Act (AGOA), and his unwavering commitment to the role of the U.S. in advancing conflict resolution in the toughest corners of the world in partnership with our allies and international institutions such as the UN.

“It is important to recognize the significant management reforms the UN is undertaking to make sure that the right people with the right skills are in the right place. This includes recruiting more women to serve at the UN – they play a critical role in the peacekeeping process,” stated Rep. Ed Royce.

The award was presented at the UNA-USA 2018 Leadership Summit, an annual conference that trains and mobilizes Americans who support the vital work of the UN.

“As chairman of the U.S. House Foreign Affairs Committee, Rep. Ed Royce has played an instrumental role in facilitating a strong U.S.-UN relationship. In addition, through his bipartisan legislative efforts, Royce has been a champion for women’s equality, peace and security, and human rights around the world. I am grateful for Chairman Royce’s dedication to American global engagement, and for his support of UNA-USA’s grassroots advocacy efforts across the United States,” stated Marco Fabian Sanchez, a UNA-USA Member and California constituent of Chairman Royce.

“From working across the aisle to champion development in Africa to working hand-in-hand with the Secretary-General to resolve conflicts, Rep. Ed Royce has embodied the spirit of bipartisan global leadership that is essential for advancing our country’s interests and values worldwide,” added Chris Whatley, Executive Director of UNA-USA.

The Summit concludes today with UNA-USA’s annual Lobby Day. With more than 600 Americans from across the nation in attendance, this summit marks the largest gathering ever of Americans on Capitol Hill united in their support of a fully funded UN. During nearly 300 in-person meetings with Members of Congress and their staff, advocates will collectively call for full U.S. funding for the UN Regular Budget and UN Peacekeeping dues in the Fiscal Year 2018 budget. UNA-USA members will also commemorate the 70th anniversary of the Universal Declaration of Human Rights by presenting a copy of the document to every Member of Congress.

The convening takes place at a pivotal moment for the world and the U.S.-UN relationship. Attendees are expected to ask Congress to maintain robust U.S. support for vital UN agencies and programs and discuss pressing global issues like climate change, peace and security, human rights, the refugee crisis, and more.

“It is a unique moment when this many Americans from all ages, from diverse backgrounds, and from every corner of the nation come together to fight for what we know is right,” said Teta Banks, National Council Chair of UNA-USA. “Our growing movement of 20,000 Americans proves that our movement knows no bounds. Global leadership starts with us, but our work is never finished – there is always more we can do to build a brighter future.”

About the United Nations Foundation: