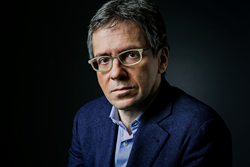 The world order in place since the aftermath of World War II is coming apart, and global summits like the G-7 and G-20 no longer have the influence they once did. This is what political scientist Ian Bremmer calls the “GZERO World.”

To make sense of this fast-changing world, WNET, parent company of New York’s PBS stations THIRTEEN and WLIW21 and operator of NJTV, launches a new half-hour public affairs series, GZERO WORLD with Ian Bremmer, premiering Saturdays at 7:30 a.m. on NJTV and 10:30 a.m. on THIRTEEN beginning July 14 and Sundays at 11:30 a.m. on WLIW beginning July 15. Episodes will be available to stream Saturdays via thirteen.org/gzeroworld and THIRTEEN Explore apps. The series joins WNET’s stable of trusted news programming, where news is accurate and well-sourced, dialogue is respectful and diverse points of view are considered.

Each episode will conclude with “Puppet Regime,” a political satire series that features puppet versions of Donald Trump, Vladimir Putin, Kim Jong-Un, Angela Merkel, Mark Zuckerberg, host Ian Bremmer and others, for a lighter-side look at the stories of the moment.

Bremmer is the president and founder of Eurasia Group, the leading global political risk research and consulting firm. He is also president and founder of GZERO Media, a Eurasia Group company, dedicated to providing the public with intelligent and engaging coverage of global affairs. Bremmer is a thought leader, best-selling author and noted lecturer, regularly expressing his views on political issues in public speeches, television appearances, and top publications. He teaches classes on political risk as a professor at New York University and is a foreign affairs columnist and editor at large for TIME magazine.

ABOUT GZERO Media
GZERO Media is a company dedicated to providing the public with intelligent and engaging coverage of global affairs. It was created in 2017 as a subsidiary of Eurasia Group, the world’s leading political risk analysis firm. Our coverage takes many forms – print, digital media and broadcast television. Find us at gzeromedia.com.