GWO predicted months in advance where the 2018 and 2017 United States hurricanes would make landfall – who will get hit in 2019? 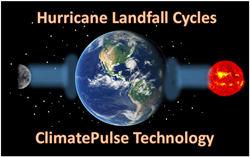 predictions by numbers are meaningless - what matters is where the storms will track, and if they will make landfall. GWO’s landfall predictions have proven to be very accurate and essential for increased preparedness.

Global Weather Oscillations (GWO), a Florida based hurricane prediction company headed by former NOAA meteorologist professor David Dilley - has issued the most accurate preseason and in-season outlook predictions by any organization during the past 10 years.

GWO issues predictions for 11 United States zones stretching from New England to Texas, and two prediction zones for the Lesser Antilles. The zone predictions detail what will likely occur in your zone during the upcoming hurricane season – and details if your zone will have a hurricane or tropical storm - and if so- where it will likely make landfall, and with what strength. Predictions are derived from “ClimatePulse Technology” developed by Professor Dilley and based on natural rhythm cycles of earth-moon-sun interactions. The Natural ClimatePulse controls hurricane landfall cycles and the position of the Bermuda High Pressure Center.

Global Weather Oscillations (GWO) was cited by news media in 2017 “as the only major hurricane prediction organization that correctly predicted the hyperactive 2017 Atlantic hurricane season from beginning to end, and the destructive United States hurricane landfalls”.

With the 2018 Atlantic hurricane season mostly in the record books – GWO is again the only organization that correctly predicted the 2018 season from beginning to end. Professor David Dilley, senior forecaster and researcher for Global Weather Oscillations (GWO), predicted that both hurricane seasons of 2017 and 2018 - would be the most destructive and costly since at least the 2004 season. And in addition – predicted 7 months in advance where the storms would make landfall, and the strength of the hurricanes.

Professor Dilley correctly predicted that the United States would have 2 major impact hurricanes in 2018 (Michael and Florence). And as many forecasters lowered their predictions in early August of 2018, GWO did not waver and continued to emphasize that two major impact hurricanes would make landfalls during the period from mid-August into September.

As it turned out, the 2018 season was about 35 percent above the long-term average, with 15 named storms, 8 hurricanes and two major impact hurricanes. The first major impact storm was Hurricane Florence that caused historic flooding in the Carolina’s in mid-August. Then came the historically strong Category 4 Hurricane Michael that struck the Florida Panhandle on October the 10th. Hurricane Michael was the strongest hurricane on record to hit the Panhandle, and the strongest hurricane to enter southwest Georgia since 1898.

Preliminary Outlook for the 2019 Hurricane Season:
The 2019 Atlantic hurricane season will likely see fewer Atlantic Basin named storms than the past two years, and thus closer to the long-term average. But do not take this lightly - predictions by numbers are meaningless - what matters is where the storms will track, and if they will make landfall. GWO’s landfall predictions have proven to be very accurate and essential for increased preparedness.

Professor David Dilley and the ClimatePulse hurricane model, indicates that the United States is currently in a very active and very dangerous landfall cycle. Even though the number of storms may be down in 2019 – you can still expect 1 or 2 major impact hurricanes to strike the United States – and GWO’s zone predictions will tell you where the landfalls will occur. GWO’s official 2019 predictions will be released 01 February 2019.

GWO and Professor David Dilley conduct outlook webinars during the hurricane season, and tracking webinars when storms are expected to form and move toward land. With GWO’s pre-knowledge for knowing which zones are likely to be struck by a hurricane, the webinars become an important long-range planning tool for increased readiness 4 to 14 days prior to landfall.

GWO is a working partner with the International Hurricane Protection Association–INHPA, with emphasis on informing citizens and companies about hurricane cycles and preparing for the upcoming hurricane seasons. More information is available via GWO’s preseason hurricane webinars and via our web sites at GlobalWeatherOscillations.com