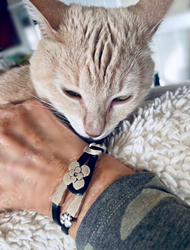 When Alexis Hunter conceived of her distinctive line of jewelry and accessories, it was merely an outgrowth of the painting and other visual art she’d engaged in for decades. But several years ago, something happened to shift the trajectory: the distinctive bracelets, necklaces, and earrings hand-made in her Palm Springs home were increasingly being worn by a diverse swath of celebrities. Steven Tyler, Shari Belafonte, Liv Tyler, Chandler Leighton, Marilyn Michaels, Joanna Cassidy, Gail O’Grady, and Ruta Lee are all enthusiastic patrons of Hunter, who is also an author and retired model. The list keeps growing, expanding to Victoria's Secret /Cosmopolitan model Virginia Shaddick MacGregor, especially now with the new “Paws for Thought” collection’s message of animal rights.

The new collection brandishes a sterling silver paw imprint with a band made of a leather-like blend, fully animal-free. Hunter has also designed a pendant for the Coachella Valley Horse Rescue, donating one of the pieces for an upcoming charity auction.

“One of the first to show excitement about my bracelets was the late comedian Kaye Ballard”, Ms. Hunter explained. “She was a good friend and quick to refer others, and it spread from there”. Hollywood and New York have responded in kind, as did the music industry, with Aerosmith’s Steven Tyler and actress daughter Liv fighting over the same unique piece!

Most recently fitness guru Tamilee Webb of Buns of Steel fame, a major animal-rights advocate, has sought out the new line, as did infamous soap opera villain Louise Sorel whose animal affections have never matched her on-screen persona. And actress Concetta Tomei is also awaiting her bracelet. “I’ve spent many years feeding the strays of the Valley”, she said. “I sit up nights to get them spayed and neutered. It’s a mission.” Commitment to the love and rights of animals should not only be mandatory but be worn beautifully. For more information see: http://www.AlexHunterPalmSprings.com