Oil prices may reach $180/barrel, President of Houston Energy Club says, if Russian invasion of Ukraine is not ended soon. 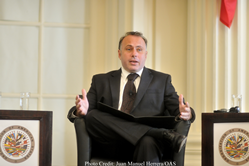 The speakers discussed the energy outlook in Latin America for 2022, with a focus on developing infrastructure projects in the region.
Dr. Francesco Stipo, President of the Houston Energy Club, declared that "oil prices may reach $180, setting a new record, triggered by the war in Ukraine and the rebound of energy demand after the COVID 19 pandemic.

Dr. Stipo declared that high oil prices will benefit oil exporting countries such as Brazil and Mexico, but will have a negative impact on oil importers such as Argentina and Chile.
Venezuela will gain from high oil prices but the economic sanctions on Russia will reduce the financial support it receives from Russia."
The Houston Energy Club is a public policy analysis organization composed of energy experts and executives based in Houston.
The organization has held the Latin America Energy Forum since 2016.