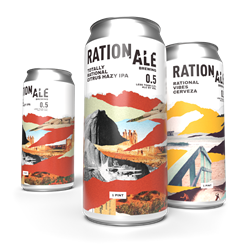 “My love for delicious craft beer is what drove me here and the desire to prove that an alcohol-conscious lifestyle for those of us seeking more moderation didn’t have to come with sacrifice,” said Jamie Fay, Founder of RationAle Brewing.

Alcohol-conscious consumers and craft beer enthusiasts alike are getting a welcomed upgrade to their alternative beverage options, this January, with the launch of RationAle Brewing (http://www.rationalebrewing.com) and its line of small-batch, non-alcoholic craft beers, now available online nationwide as well as in select retailers and on-premise outlets throughout the U.S. West Coast.

Served in 16 oz. cans, the two SKUs are already adding variety, flavor and innovation to the fast-growing U.S. non-alcohol beer category, as rational options to enjoy craft beer in moderation.

“My love for delicious craft beer is what drove me here, in the first place, and the desire to prove that an alcohol-conscious lifestyle for those of us seeking more moderation didn’t have to come with sacrifice — or constant rationalizing; that’s when RationAle Brewing came to life,” said Jamie Fay, Founder of RationAle Brewing. “Through the strategic industry partnerships we already have in place, our team’s industry expertise spans manufacturing, research and development, marketing, public relations and sales, with more than 50 years of combined experience. This will, without a doubt, be a key driver of our success in the booming NA category, by increasing distribution, scaling our team, and innovating our products quickly and effectively.”

As his first entrepreneurial venture as a founder, Fay brings more than 25 years of global leadership experience within the CPG industry. Previously, Fay worked for companies such as E & J Gallo Winery, Danone, Mars Incorporated and Hain Celestial Group, as well as early startup food, beverage and cannabis brands, where he acted as President and CEO to support strategic brand growth and sales execution.

RationAle also took on equity partners, Zach Minard, Founder of Tall Trees Design Co. (http://www.talltreesdesignco.com) — an independent branding and design studio with extensive craft beer experience — and Jess Windell, Founder and CEO of Maven Consulting (http://www.mavenconsultingco.com) — a performance PR and consulting firm specializing in CPG food and beverage — to support the go-to-market strategy and growth of the brand, alongside Fay.

“When Jamie came to me with the concept of RationAle and its line of bold, flavorful, non-alcoholic craft beers, he shared with it the idea that you shouldn’t have to be torn between having another delicious craft beer or avoiding one due to the effects of alcohol, and the aspiration of being able to do it all without sacrifice. The visual representation of that is what I built the brand on,” said Minard. “With Jamie at the helm of the operation — his robust industry network, unwavering ambition and entrepreneurial spirit — the success of RationAle is undeniable, and I can’t wait to continue building this brand into a category steward within an industry for which I have so much personal passion.”

With its January 2022 launch via eCommerce and expanding retail doors, RationAle is paving the way for future innovation and expansion within the U.S. non-alcoholic beer category which is expected to reach $3B in annual sales by 2025. The trend is being led by consumers desiring more mindful consumption around alcohol, with 58% of consumers reporting switching between alcohol and no- or low-alcohol beverages on the same occasion.

“We’ve seen the conversations around alcohol consumption shift within the consumer, social and media landscapes over the last few years, and especially with more time spent at home, taking the topic of ‘drinking in moderation’ from taboo to trendy, which is apparent by the emergence of non-alc brands within the wine, spirits and beer categories,” said Windell. “One taste of RationAle and you immediately notice the full body and delicious flavor notes of this premium beer. That’s what gets us most excited, as no amount of funding nor branding alone can generate genuine endorsements without the quality and superior taste of the product to back it up.”

All of RationAle’s flavor-forward brews are served in 16oz. cans, made with high-quality ingredients and in small batches, mimicking the bold, refreshing taste of traditional craft beer.

Following the official launch, RationAle has plans to grow and further establish its portfolio of beers and team throughout California, Oregon and Washington — across sales, brand marketing and events — and innovate its offerings to build upon existing product lines.

To learn more and shop for RationAle, visit http://www.rationalebrewing.com.

RationAle Brewing offers an innovative variety of small-batch, non-alcoholic craft beers for those seeking to embrace moderation while drinking consciously and living boldly.

Founded in 2021 by Jamie Fay and officially launching into the non-alcohol craft beer category in early 2022, RationAle is rooted in the idea of embracing moderation without sacrifice,

Brewed by a Barrel Brothers Brewing Company, a dynamic and experienced craft brewery in Northern California, RationAle’s first two products — a Totally Rational Citrus Hazy IPA and a Rational Vibes Cerveza — are produced using a proprietary distillation technology to gently remove alcohol from the brewed beer, with minimal effects to its integrity and overall quality.

The 16 oz. cans of RationAle are available in retailers throughout Southern California and online at http://www.rationalebrewing.com at an average SRP of $4.00/can.

RationAle Brewing, founded in 2021 by Jamie Fay and officially launching into the non-alcohol craft beer category in early 2022.RationAle Brewing offers an innovative variety of small-batch, non-alcoholic craft beers for those seeking to embrace moderation while drinking consciously and living boldly.