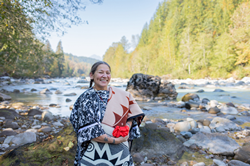 “In writing this book, I was determined to interview people with diverse lived experiences and backgrounds... I’m inspired by the way Zoe Helene champions women, plants, and the planet, and have learned so much from those whom I’ve connected with through Cosmic Sister.” – AMANDA SIEBERT

Cosmic Sister continues to expand the reach of women’s voices in sacred medicine and psychedelics with the placement of several key leaders in two upcoming books, Psyched: Seven Cutting-Edge Psychedelics Changing the World by journalist Amanda Siebert and How Psychedelics Can Help Save the World: Visionary and Indigenous Voices Speak Out, an anthology edited by event organizer and ceremony leader Stephen Gray.

Amanda Siebert (@amanda_siebert), a journalist covering the intersections of culture, science, and health in cannabis and psychedelics, says she owes her life to the plants, fungi, and compounds she writes about. In Psyched, she explores seven psychedelic medicines, interweaving real-life stories, clinical research, and interviews with some of the world’s leading psychedelics experts and cultural allies.

“Psychedelics have reemerged as one of the twenty-first century’s most powerful sources of human improvement and healing. While the wave of support for these medicines is growing in mainstream society, the use of psychedelics—particularly sacramental and medicinal plants and fungi—dates to prehistory. Psychedelic drugs and plant medicines can offer new perspectives on treating illness—ones that create lasting, positive change in people’s lives, sometimes removing the need for other medications. But that’s just the beginning.” – AMANDA SIEBERT, Psyched

“In writing this book, I was determined to interview people with diverse lived experiences and backgrounds. I’m grateful to Zoe Helene for sharing her heart-earned wisdom with me, and for connecting me with several of the brilliant women featured in Psyched,” said Siebert. “I’m inspired by the way Zoe Helene champions women, plants, and the planet, and have learned so much from those whom I’ve connected with through Cosmic Sister.”

The following Cosmic Sisters are featured in the book.

Names are in alphabetical order, and advocacy books are in chronological order (earliest release first).

Mary Porter Eagle Has Landed, a descendant of the Nez Perce; Yakama, and Wasco tribes and founder of Looking Glass Peyote Church of Oregon, is featured in the chapter about peyote (Lophophora williamsii), a sacred psychedelic medicine native to Turtle Island. Porter is a Cosmic Sister Ancestor Medicine recipient and a member of the Cosmic Sister Expert Advisory Circle.

“Before I took the sacrament, I was a gun-toting Harley rider, and I rode with combat veterans. I was the sergeant at arms of a motorcycle club, and a very violent, very cold person. I was called to the medicine, and since that day, my whole life has been dedicated to giving the sacrament its due, as a human being on this earth to help other human beings. What I’ve been taught is that this is a catalyst for your spiritual evolution, almost like what happened when your spiritual life began in your mother’s womb.” – MARY PORTER EAGLE HAS LANDED, Psyched

Raven Marie (@ravenmarie111), an iboga facilitator and Bwiti initiate, is featured in the chapter about iboga (Tabernanthe iboga), a sacred psychedelic medicine native to Africa. She is a Cosmic Sister Women of the Psychedelic Renaissance and Cosmic Sister Ancestor Medicine recipient.

“Iboga has a reputation as being a very difficult or a scary medicine—and yes, it’s not fun having to look at your shit, especially from a place of full ownership. Rewriting my relationship to my trauma is what’s been very profound for me. I went from absolutely being unbearably unable to spend time with my family, to now being able to receive them and love them, just as they are. Most importantly, it’s allowed me to have a different relationship with myself.” – RAVEN MARIE, Psyched

Laurel Sugden (@mother.of.cactus), ethnobotanist and writer, is a double Cosmic Sister Women of the Psychedelic Renaissance recipient and Cosmic Sister Emerging Voices recipient, is featured in the chapter about the sacred cactus wachuma, also known as San Pedro cactus (Echinopsis pachanoi), a sacred psychedelic medicine native to the Andes Mountains.

“From a spiritual perspective, San Pedro can awaken a sense in the user that everything is alive, that everything is animate, that it has a spirit and a soul. This sense of animacy is at the core of why reciprocity works the way that it does in the Andean world, where it’s common for people to make offerings to the land instead of simply issuing a thought or a word of gratitude.” – LAUREL SUGDEN, Psyched

Zoe Helene, Cosmic Sister’s founder, is also featured in the ayahuasca chapter, along with her husband and partner, ethnobotanist Chris Kilham (@medicinehunter). Ayahuasca is a combinatory medicine native to the Amazon Basin, traditionally made with both ayahuasca vine (Banisteriopsis caapi) and chacruna (Psychotria viridis).

“You know the phrase ‘An apple a day keeps the doctor away’? It’s the whole apple. It’s not just the skin, or just the tasty part—it’s all of the above… It’s the set and setting. It’s the agreement you make with yourself to suspend disbelief, and with others who are participating. It’s releasing judgment, it’s your intention, and it’s the dieta [diet] you do to prepare… It’s important to watch what you put into your mind before you consume ayahuasca.” – ZOE HELENE, Psyched

The anthology explores the way forward for humanity and includes more than 25 contributors writing about how the wisdom of Indigenous peoples and the power of psychedelics can help us enact the radical shift in consciousness necessary to navigate the collapse of the old world order and the birth of a new consciousness centered on awakened-heart interconnectedness.

“The call now is for us humans to humbly and courageously face our situation without turning away; engage unequivocally with the inner and outer work that must be done to build a sane and sustainable future for the generations to come; and learn what it will take to collectively embrace and apply our best visions.” – STEPHEN GRAY, How Psychedelics Can Help Save the World

“Zoe Helene of Cosmic Sister and I have been working closely together since 2016 to find and bring powerful women from many backgrounds to our annual Spirit Plant Medicine Conference,” says Gray. “We agree that gender balance and diversity in this work are more than important—they're essential.”

The following Cosmic Sisters contributed chapters to the anthology.

The Dank Duchess (@TheDankDuchess), a Panamanian-American hashish and psilocybin media personality, contributed “Growing Cannabis: Submitting to the Wisdom of the Plant.” She is a double Cosmic Sister Women of The Psychedelic Renaissance recipient and a member of the Cosmic Sister Expert Advisory Circle.

“Cannabis is not a shy plant. Rather, it provides clues to the breeder, grower, processor, and finally the person ingesting it. Experience. We need only listen.” – THE DANK DUCHESS, How Psychedelics Can Help Save the World

Belinda Eriacho (@belindap.eriacho), a wisdom carrier and healer of Dine’ (Navajo) and A:shiwi (Pueblo of Zuni) Native American descent who contributed “The Turning of the Soil,” is a Cosmic Sister Women of The Psychedelic Renaissance recipient.

“Many of us have had to look at and deal with our shadows and the inner healing of our souls. These shadows are aspects we don’t want to acknowledge, to look at, to accept, and embrace. And yet these shadows contribute to the collectiveness consciousness of humanity.” – BELINDA ERIACHO, How Psychedelics Can Help Save the World

“Ceremony is in all moments. Before consuming cannabis, ceremony can look like an expression of gratitude, an intention-setting or prayer, or a deep breath and pause. Mindful consumption brings a healthy relationship with and awareness of the plant, how it got into your hands, and the Earth’s giving nature.” – MINELLI EUSTACIO-COSTA, How Psychedelics Can Help Save the World

“The idea of ‘reconnecting with nature’ is a human-supremacist construct. We are nature. We are nothing but nature. We are embodied psyches living in vulnerable flesh-blood-and-bones vessels. We’re born, we live, we die, we decompose. We’re animals—wildlife indigenous to Earth. And like other wild species, without freedom we fall apart. We are able to habituate to codes of conduct and the urban matrix so we can maintain a degree of control (an illusion), but our psyches are untamable.” – ZOE HELENE, How Psychedelics Can Help Save the World

Martina Hoffmann (@martina_hoffmann_art), visionary artist, contributed “The Role of Visionary Art in Elevating Global Consciousness.” She is a Cosmic Sister Women of The Psychedelic Renaissance recipient and a member of the Cosmic Sister Expert Advisory Circle.

“As an artist who has created since early childhood, I’m deeply aware of the importance and great benefits that active participation in the creation of reality can have on our well-being... In short, the creative process can be a spiritual practice, a deep meditation, and a shamanic journey into—as well as an expression of—our personal unconscious, subconscious, and collective unconscious.” — MARTINA HOFFMANN, How Psychedelics Can Help Save the World

Rachel Kann (@realizeparadise), devotional poet and ceremonialist, contributed “The Beckoning Reckoning.” She is a Cosmic Sister Women of The Psychedelic Renaissance recipient.

“We have this last chance to
let us be like the trees.
Let us learn from their wisdom.

Let us collectively
cultivate empathy,
expand our capacity
for understanding,
build our stamina.

– RACHEL KANN, from the poem, “The Beckoning Reckoning,” How Psychedelics Can Help Save the World

Laurel Sugden, ethnobotanist and writer, contributed “Save a Dragon, Slay the Grail.” She is a double Cosmic Sister Women of The Psychedelic Renaissance and Cosmic Sister Emerging Voices Award recipient.
“It is the enormous and repeated doses of medicine designed to shatter egos and ram through the fortress walls of modern consciousness. It is the fetishization of transcendence at the expense of embodiment. It is the conviction that the answers will be found ‘out there,’ and we just need to push the limits a little farther. It is the very idea that life is a problem to be solved, and that there is an answer to the mystery, and if we had the answer we would know how to live. It is the cold, straight, upward path to enlightenment.” – LAUREL SUGDEN, How Psychedelics Can Help Save the World

ABOUT THE FEATURE IMAGE

Mary Porter Eagle Has Landed (@portermaryteresa), cultural revival educator and founder of Looking Glass Peyote Church of Oregon, descendant of the Sauk-Suiattle, Nez Perce, Wasco, Yakama Tribes, received a Cosmic Sister Ancestor Medicine Award for a photoshoot with Holli Margell of Native Light Photography (@nativelightphoto). In the photo, Mary stands on the banks of the Sauk River, homeland of the Sauk-Suiattle tribe in northwestern Washington in the United States. Wrapped in a red scarf that symbolizes the blood of the ancestors, she holds peyote (Lophophora williamsii), “the sacrament.” After the photoshoot, Mary gave the sacrament to the river as an offering. “It felt good, like I was administering the medicine to the river,” she says. “Let the healing begin.”

Cosmic Sister (@CosmicSister) is an environmental feminist collective is an environmental feminist collective and creative studio founded in 2007 by Zoe Helene, originator of Psychedelic Feminism. Cosmic Sister champions women’s frontline voices, emphasizing our responsibility—as Earth’s apex predator—to rapidly evolve from a cultural and behavioral perspective. We advocate for the right to journey with sacred psychoactive and psychedelic plants and fungi as a way to jump-start rapid cultural evolution, starting with women’s healing, empowerment and self-liberation. Our interconnected advocacy initiatives bring women’s voices to the forefront in the field of psychedelics (and beyond). We have hope for the future.

Amanda Siebert (amandasiebert.com) is an author, multimedia journalist, host, and speaker covering the intersections of culture, science, and health in cannabis and psychedelics. She is also the author of The Little Book of Cannabis: How Marijuana Can Improve Your Life.

Stephen Gray (stephengrayvision.com) is an author/editor, event organizer and speaker, and ceremony leader. He has been deeply involved with spiritual practices and sacramental medicine work, including Tibetan Buddhism, the Native American Church (peyote prayer ceremonies), cannabis, and ayahuasca, for over 40 years. He also edited the anthology Cannabis and Spirituality: An Explorer's Guide to an Ancient Plant Spirit Ally.