The Largest Halloween event in San Francisco to take place on Saturday, October 29.

The 10th Annual Crawloween Pub Crawl, the largest Halloween event in San Francisco, is taking place from Friday, 10/28 to Monday, 10/31. 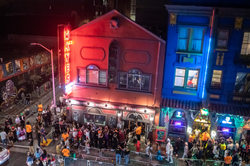 Over 10,000 people are expected to attend Crawloween, with over 40 participating bars and restaurants.

Tickets for Crawloween range from $12 to $45 with prices rising as the event date gets closer. Ticket price includes access to drink specials at all participating bars, free cover at all bars, a costume contest, party favors, free party bus rides, DJs and more.

Full details for the event are available at: https://www.crawloween.com

A local San Francisco company that launched in 2003, CrawlSF was created after the founder, Matt Seliga, relocated from Baltimore to the San Francisco Bay Area for a job in Biotech. As a new transplant to San Francisco (and after feeling the effects of the high cost of living in San Francisco), Matt worked in his spare time to bring the pub crawl concept to San Francisco, which allowed him to meet new people and earn some extra money on the side. Ultimately leaving his Biotech career behind in 2008, Matt has mainly focused on building the CrawlSF brand. Also the Co-Founder of Eye Heart SF, M Ride and Pinchit.com, Matt has developed several businesses in the marketing and events vertical. Since 2003, CrawlSF has produced over 200 Bay Area events with well over 300,000 attendees and CrawlSF.com serves as a guide for locals and visitors who are looking for things to do in the San Francisco Bay Area. The company is owned and operated by Matt and his wife, Caitlin. CrawlSF Signature Events include: