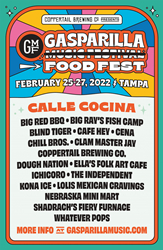 “We have an amazing lineup of festival foodie favorites along with some new faces for 2022.”

Ty Rodriguez, co-owner of Tampa’s Rooster & the Till, is back at the helm as GMF’s Food & Beverage Director. “We are excited to announce this year’s Calle Cocina lineup,” said Rodriguez. “We have an amazing lineup of festival favorites along with some new faces for 2022.”

GMF has added five new operators to this year’s lineup – Big Red BBQ, Blind Tiger Coffee, Chill Bros Scoop Shop (Sunday Kids Fest only), Clam Master Jay, and Coppertail Brewing Co. These additions round out one of the most diverse ‘food’ festivals in the state and offer a broad slice of Tampa’s ever growing food scene.

The complete menu line up is below, on the GMF 2022 app, and at http://www.gasparillamusic.com/venue-map/food-information/

GMF 2022 beverage program is led by Tampa’s award winning Coppertail Brewing Co, who has quickly become the largest privately owned brewery in Florida. And one of GMF’s founding partners, Tito’s Handmade Vodka returns for their 11th year. Other 2022 partners include Tampa’s Dark Door Spirits craft distillery, Canteen/Cantina read to drink cocktails, Funky Buddha seltzers, and Liquid Death canned water. All of these beverages are served throughout the General Admission and VIP areas of the festival.

Additional information about the 2022 Gasparilla Music Festival including the complete schedule lineup is available at: http://www.GasparillaMusic.com

Tickets can be purchased by visiting http://www.gmftickets.com

ABOUT Coppertail Brewing Co.
Coppertail Brewing Co. is an independent brewery and tasting room settled in the Ybor City neighborhood in Tampa, FL. It was founded with the desire to introduce more Florida-brewed beer to the masses, with help from the sea monster that lives in Tampa Bay – Coppertail. Coppertail prides themselves on giving back to the community, having involvement with many Tampa Bay organizations, such as Walk Bike Tampa, Ybor City Development Corporation (YCDC) and Goodwill Suncoast, to name a few. The brewery came to life in 2014, with 1,000 barrels of fermentation space with tanks ranging from 30 barrels to 200 barrels. Coppertail’s core beer offerings are brewed throughout the year and each tell a different story with quality ingredients.