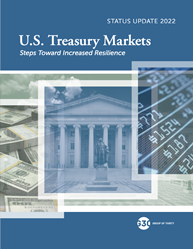 The Group of Thirty (G30) today released an update to its July 2021 report, U.S. Treasury Markets: Steps Toward Increased Resilience. The new report, U.S. Treasury Markets: Steps Toward Increased Resilience – Status Update 2022, prepared by the leadership team of the G30 Working Group on Treasury Market Liquidity, assesses the degree to which actions taken by the U.S. authorities over the last year have been consistent with the ten recommendations the Working Group made in July 2021. A review of developments in the Treasury market, including research and analysis conducted since July 2021, and recent discussions with market participants and officials in the relevant U.S. agencies, suggests the foundational case for the recommendations remains strong. Taken as a whole, the recommendations, if fully implemented, would make a meaningful contribution to improving the functioning of the Treasury market, both in normal times and in periods of crisis.

The Status Update summarizes what has been accomplished, and what remains undone, with respect to the issues identified, and recommendations made, in the original report, which addressed five sets of key issues: central bank liquidity support for Treasury market functioning; central clearing of trades of Treasury securities and Treasury repos; prudential regulation of dealers; market transparency; and market regulation. It also offers some suggestions for prioritizing and sequencing reform efforts going forward.
Timothy F. Geithner, Chair of the G30 Working Group on Treasury Market Liquidity, President of Warburg Pincus, and Former Secretary of the Treasury for the United States, noted: “We are encouraged by the actions taken over the past year, and the changes now in prospect. At a time of many potential sources of stress to the financial system, we believe the case for reform along the lines of the G30 report remains compelling. The Treasury market remains the most important financial market in the world, and it needs to be made more resilient and transparent, with broader participation and stronger oversight.”

Jeremy C. Stein, Project Advisor for the G30 Working Group on Treasury Market Liquidity, Former Member of the Federal Reserve Board of Governors, and Moise Y. Safra Professor of Economics at Harvard University, stated: “Given both the rapid growth in the size of the Treasury market, and the stresses that are likely to accompany the transition to a period of elevated inflation and much tighter monetary policy, it should continue to be a priority for policymakers to move forward with the reforms outlined in our earlier report.”

Darrell Duffie, Project Advisor for the G30 Working Group on Treasury Market Liquidity and Adams Distinguished Professor of Management and Professor of Finance at Stanford Graduate School of Business, commented: “The need for attention by policymakers remains high. It will take time and perseverance to bring the secondary markets for Treasuries to a level of efficiency and safety under stressed conditions that is commensurate with their importance to U.S. national economic security.”

Patrick Parkinson, Project Director for the G30 Working Group on Treasury Market Liquidity, Former Director of the Division of Banking Supervision and Regulation at the U.S. Federal Reserve, and Senior Fellow at the Bank Policy Institute, observed: “Because Treasury rates are fundamental benchmarks for pricing virtually all other financial assets, reforms that improve the functioning of the Treasury market are critical not only to the safety and efficiency of U.S. financial markets but also to global financial stability.”

The G30 thanks Project Director Patrick Parkinson for his contribution to the report and Project Advisors Darrell Duffie and Jeremy Stein for their support. In addition, we thank the individuals from the industry who were consulted in the research process for this update.

On June 30, 2022, at 8:30am EDT, the G30 hosted a live webinar discussion with Timothy Geithner, Darrell Duffie, Jeremy Stein, and Patrick Parkinson. A link to the webinar recording is available on the G30 website, http://www.group30.org.

The Group of Thirty is an independent global body comprised of economic and financial leaders from the public and private sectors and academia. It aims to deepen understanding of global economic and financial issues, to explore the international repercussions of decisions taken in the public and private sectors, and to examine the choices available to policymakers and market practitioners. The Group was established in 1978, and is led by Jacob A. Frenkel, Chairman of the Board of Trustees, and Tharman Shanmugaratnam, Chairman of the Group.