Next time you bite into that hot dog at a “4th of July” barbecue, Dodgers baseball legend Vin Scully wants you to taste freedom instead of a frankfurter. Baseball icon and Navy vet leads an inspirational campaign on the reasons behind American holidays 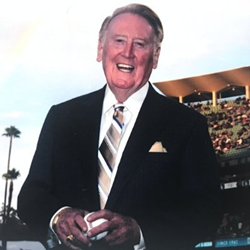 Friends, this is Vin Scully, reminding you that there’s a difference between July 4th and Independence Day...

Next time you bite into that hot dog at a “4th of July” barbecue, Dodgers baseball legend Vin Scully wants you to taste freedom instead of a frankfurter. The 94-year-old Navy veteran we’ve known as baseball’s most beloved voice for seven decades is taking us back to school… to remind us that the hot dogs, the fireworks, and the day off of work are there for a reason.

Scully had come out of retirement a few years ago to be the voice of Gold Coast Veterans Foundation (GCVF), a Camarillo nonprofit known for rescuing homeless military veterans. The elder statesman of broadcasting has already lent his name and distinctive voice to radio and mail campaigns for the organization’s veteran rescue program, for its innovative new “Veterans’ Village” housing initiative, and even recording a holiday poem about a WW2 veteran’s widow that was rescued from homelessness.

The non-profit agency is proud and thankful for Scully’s support; Executive Director Bob Harris says “We’re honored beyond belief that Vin has given us his time and energy. He’s a very patriotic and humble American, loved by all. People are moved and inspired when they hear about our efforts through his voice. Even he doesn’t fully understand how much stronger our message becomes when he delivers it.”

Harris and Scully decided to send out a different, but equally important message in the latest radio spot. Raised in Philadelphia, where American history began, Harris felt that too many Americans love their July 4th barbecues, parades, and fireworks - but don’t stop to think about why it’s a holiday. “It’s Independence Day, not Hot Dogs and Fireworks Day;” Harris complained, “it’s about Jefferson and Franklin and the Declaration”. When he read a short script reminding radio listeners about this, Scully was moved… “Let’s record this right now!”

“Vin’s recording of ‘The Difference Between July 4th and Independence Day’ was originally supposed to be broadcast on KHAY 100.7 FM before the music accompanying the big fireworks displays in Ventura County,” says Harris; “but something incredible happened when military veterans, government officials, and local business owners heard Vin’s message. They’re starting a grassroots campaign to get this recording broadcast on every radio and TV station in America before the fireworks begin!”

Hearing this sparked an even bigger idea for Scully, who was already famous half a century before there was a new meaning for the word ‘viral’. He postulated; “Bob, what if we recorded a series of public service announcements like this one, reminding people of the meaning behind every major American holiday? They don’t teach this stuff in school as much as they should - some people just look at these holidays as a day off of work.”

With that, GCVF is now launching an effort to record short public service announcements for radio and TV, asking people to think about why we celebrate Presidents Day, Memorial Day, and other traditional holidays. The organization knows that while it’s not strictly a veteran matter, it’s what all American veterans fought to uphold.

For his part, Vin Scully is reaching out to other celebrities, athletes, and artists to join him in recording these public service messages, saying; “I hope my peers in sports, entertainment, and public life will embrace this opportunity to put the meaning back into these holidays; I’m proud to make it part of my own legacy for the future.”

About Gold Coast Veterans Foundation: GCVF provides everything to prevent or eliminate suffering and homelessness for American veterans. GCVF has now rescued over 220 veterans and family members from homelessness. All services are provided free of charge. http://www.gcvf.org (805) 482-6550