Captive insurance growth in the state of Vermont remains strong

Vermont has another record year of captive formation growth 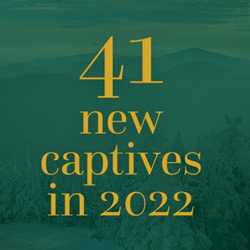 “Vermont has so much to offer, and the captive insurance industry remains a point of pride in our state.We look forward to once again improving our statutes this legislative session so we can continue to be aleading choice for companies in their captive insurance domicile selection."

The Vermont Department of Economic Development is hosting “Captive Insurance Day” today at the Statehouse to highlight the continued success of the captive insurance industry in the state after another banner year in 2022.

The State of Vermont licensed 41 new captive insurance companies in 2022. Vermont is now home to 639 licensed captives, consisting of 608 active and 31 dormant captives. Vermont’s 59 sponsored cell captives currently host over 500 cells and separate accounts, in addition to the licensed captive companies. The growth in captive formations in 2022 is Vermont’s 6th highest year of growth in its over 40-year history since passing captive-enabling legislation in 1981.

“Vermont has so much to offer, and the captive insurance industry remains a point of pride in our state,” said Governor Phil Scott. “We look forward to once again improving our statutes this legislative session so we can continue to be a leading choice for companies in their captive insurance domicile selection.”

“While we are happy to have another year of record growth, we never stop asking ourselves how we can be better,” said Sandy Bigglestone, Deputy Commissioner of Captive Insurance, Department of Financial Regulation (DFR). “We are actively looking into how to improve our statutes and internal processes to be most efficient and useful for businesses and look forward to providing the best service to them in the year ahead.”

The new captives were licensed in 17 different industries, the top three industries being healthcare (7), construction (5), and real estate (4). At least 4 of Vermont’s new captives in 2022 were formed by companies with international roots, —including Canada (2), Mexico and Austria. Top formation types were pure (30), Sponsored (6), Agency (2) and Risk Retention Groups (2). Nearly 40 new cells were formed in 2022.

“Throughout the pandemic captive insurance has been a great tool for the health care industry,” said Christine Brown, Director of Captive Insurance, DFR. “Hospitals and health care providers have had emerging risks and fewer available insurance options. Captive insurance has given them a way to have more control over that risk that’s also financially sustainable.”

“The captive industry has remained steady throughout the pandemic, and is thriving here in Vermont,” said President of the VCIA, Kevin Mead. “The momentum is strong to keep developing this great industry. We continue to raise awareness about captive insurance around the world, and we look forward to expanding our efforts in the year ahead.”

“The captive industry brings in significant and increasing revenue to the state of Vermont and jobs for Vermonters year after year,” said Brittany Nevins, Captive Insurance Economic Development Director, Department of Economic Development. “We are committed in 2023 to continuing our proactive and innovative work to remain a top domicile choice for captive insurance companies worldwide.”

“Despite times of great transition in the world, the Captive Insurance Division in Vermont has continued to be a leader that companies can count on,” said Department of Financial Regulation Commissioner Kevin Gaffney. “Our dedication to quality and efficient regulation of captive insurance companies has been unwavering through periods of change.”