Director Armand Mastroianni joins producers Bill Badalato and Boris Acosta along a cast of celebrities, including an Oscar-winner, to tell the incredible story of the 33 Chilean miners, trapped near 700 meters down, who beat the odds and emerged alive after 70 days underground – longer than anyone has previously survived. 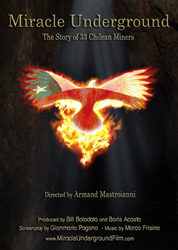 Everyone has a mission in life. When something dramatic happens, that is a call from God to find it.

Miracle Underground is a fictionalized account of the 33 Chilean miners' ordeal, told from a spiritual point of view, as each one of them individually came face-to-face with the real prospect of death after 17 days underground with no word from the outside world. The film explores the emotional, spiritual, and psychological experiences of the 33 men, and how they were able to survive both physically and mentally in a situation that no human beings have emerged from alive before. The film will show the desperation, as well as the discipline, of 33 Chilean miners who wanted to live, in part so they could help other miners demand safer working conditions.

The story is presented in a chronological unfolding of events, from the descent to almost 700 meters below the surface, to the rescuing of all the miners by the custom-built Phoenix 1 and Phoenix 2 capsules. The story also shows the determination of the miners' wives to call the attention of the Chilean people, including President Sebastián Piñera and his cabinet, and the world in general, to the necessity of locating the miners and rescuing them alive.

Miracle Underground features Eric Roberts (Expendables, The Dark Night) as Chilean President; Vincent Spano (Alive, Dante's Hell Animated) as "the captain" of the miners; Nia Peeples (The Outside, Inferno by Dante) as the miner's wife that mobilized all other wives and settled camp along the mine; Helene Cardona (Chocolat, Inglourious Basterds) as President Sebastián Piñera's wife; Jenn Gotzon (Frost/Nixon, Dante's Inferno) as the beautiful wife of one of the miners; Dalia Hernandez (Apocalypto) as one of the miners' wives; Adrian Paul (The Highlander, Dante's Hell Documented) as one of the miners and Isaac Singleton Jr. (Transformers, Pirates of the Caribbean) as the European reporter.

Miracle Underground film has already started the development process and it is expected to be filmed anytime early in 2012.

Some of the proceeds from this production will be donated to a foundation that will be devoted to making life safer for all miners around the world.