The Oracle: What is Moral Courage? 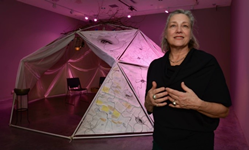 "The Oracle geodesic dome installation creates a space, in time and place, to ask a question, to share personal tales of courage and inclusion and most importantly listen within for meaning.” - Cynthia Scott

In an era of rampant division, one artist uses a geodesic dome and Tarot to convey a real-life act of courage and message of hope. Cynthia Scott’s interactive artwork inspires visitors to search inward as they share personal tales of courage and inclusion.

The Oracle installation will be on display until April 28. The gallery exhibition continues until May 12, 2019.

The Oracle is an interactive installation with a geodesic dome at its center designed to inspire visitors to both savor Scott’s artistic interpretation of moral courage and inspire them to reveal their own stories. The panels of the dome form a network of neurons and dendrites with handwritten notes, artifacts written by many hands in several languages. The installation is meant to be interactive and visitors are invited to participate by sharing their own stories of moral courage. These stories are then collaged onto the large triangular canvas panels of neuron network with neuro eyes to perceive.

Scott recently completed her MFA in Visual Art at Lesley University in Cambridge, MA where her research led her to consider ancient methods to seek meaning, one of them being the method of Tarot reading to be applied in an age of hyper-distraction.

Scott’s inspiration for The Oracle, and the use of the Geodesic dome was to honor three young men—Taliesin Namkai-Meche, Ricky Best and Micah Fletcher—who were killed or badly injured while saving two young Muslim women from a murderous attack aboard a train in Oregon in 2017. Taliesin Namkai-Meche, who was killed in this attack, believed that his mission was to seal the fracture caused by hatred and bigotry with love and compassion.

“Thank you for holding the light. Everything we can do to inspire the world toward Love is worthy of being done!” quotes Asha Deliverence, Taliesin’s mother.

“The search for the ability to unplug in an age of hyper-distraction, and look inward, may be more important than ever. The Oracle geodesic dome installation creates a space, in time and place, to ask a question, to share personal tales of courage and inclusion and most importantly listen within for meaning.” (Scott)

Artist Cynthia Scott was born in Boston, MA in 1956, Cynthia Scott is a military nomad both as a child and adult. A retired U.S. Air Force Lt. Col., Cynthia is an award-winning visual communication strategist with specialized expertise in television production and distribution. She co-owned and operated a seasonal art gallery on Cape Cod from 1996 – 2002. Cynthia recently completed her MFA in Visual Art at Lesley University in Cambridge, MA. She now lives in Frederick, Maryland where she continues a lifelong practice of creating and exhibiting her art work.