Elvis fans from around the world will gather in Middle Tennessee for the 4-day festival, filled with celebrity appearances, live music performances, an Elvis movie screening and 26 of the best Elvis tribute artists from all over the world. 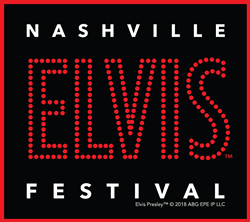 Elvis™ fans from around the world will gather in Middle Tennessee March 28-31, 2019 for the 3rd annual Nashville Elvis Festival, celebrating the music and legacy of the King of Rock & Roll™. The historic Franklin Theatre, located just south of downtown Nashville in the charming suburb of Franklin, Tennessee, will serve as the host venue. Tickets are on sale now at http://www.NashvilleElvisFestival.com.

The 4-day festival will be filled with celebrity appearances, live music performances, an Elvis movie screening and 26 of the best Elvis tribute artists from all over the world. In addition, two special VIP events will feature live recreations of Elvis’ recording sessions - both events will take place inside Paragon Studios - one of the nation’s top recording studios.

The festival will also be hosting an Ultimate Elvis Tribute Artist Contest preliminary round with the winner moving on to Graceland's Ultimate Elvis Tribute Artist Contest Semifinal Round in Memphis during Elvis Week 2019. Twenty contestants have been invited to compete in Nashville, coming from all over the USA as well as Canada, Norway, Chile, Australia and the United Kingdom.

Backing all live performances will be the incomparable EAS BAND, known for their performances all over the world backing tribute artists and giving the feeling and excitement of being at an actual Elvis concert.

Nashville Elvis Festival is hosted by TOM BROWN, host of "Tom Brown in the Morning" on Tupelo's Sunny 93.3 and the former Vice President of Original Production for Turner Classic Movies (TCM). Elvis fans will recognize Brown as a longtime host of Elvis events nationwide, including select Graceland events and the "Gates of Graceland" web series.

For tickets and information, please visit the official website at http://www.NashvilleElvisFestival.com.