Crypto Market Research has discovered a new Alternative to Bitcoin, known as 42 Coin. 42 Coin is currently worth over 100x more than Bitcoin, and it is the highest valued Crypto Currency today. 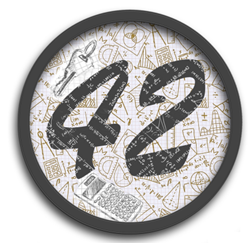 The First Crypto Currency Worth 100X More Than Bitcoin, Should be traded for High Valued Products, Services, and Collector's Memorabilia.

The premise behind 42 Coin is its rarity with only 42 coins to ever be created, anyone with a computer can easily join the network to start mining, accepting and sending 42 coin payments for personal or business reasons.

42 Coin is similar to Bitcoin with its financial system and user friendly features that allows users to send and receive coins with anyone in the world using digital addresses created by the Network. In fact, anyone with a computer can begin sending and receiving coins without using a financial institution, and without paying for transaction fees. In addition, this crypto currency is 12x faster than Bitcoin and other Alternative Currencies because it only takes 42 seconds to confirm any payments, this brings ease to both senders and receivers providing reassurance that transactions have been successful. Transaction time has been a known issue with Bitcoin, which could take 15 minutes or even hours before a transaction is complete; however, 42 coin has solved that exact problem by keeping a 42 second confirmation time.

42 Coin was created only two short months ago, it was launched in early January of 2014 via http://www.42coin.org and has already delivered high demand for its valuation. Today, a single 42 coin is worth about $80,000 USD. At the time of writing this article only 1.7 coins exist today, this makes 42 Coin very rare, and makes this digital coin 100x more valuable than Bitcoin. The crypto currency Bitcoin is worth $700 USD, Litecoin $17 USD, and DogeCoin that has most recently appeared all over the internet and media networks, is currently worth $0.0010 USD, reporting statistics via http://www.CoinMarketCap.com

At its peak value, 42 was traded at the highest rate at 1900.00 BTC per 42 coin. At that time only 0.8 coins were in circulation, meaning this was the first crypto coin to exceed one million US dollars for less than 1 whole coin in circulation. This is different than any other crypto currency which has access to hundreds and thousands of (whole) coins in circulation, this is another reason why 42 coin is unique with only 42 (whole) coins ever to be created.

Business Insider released its news announcement on Jan. 14, 2014 introducing 42 to the financial and business community stating, “It’s called 42Coin, and one of them is already worth 1,000 Bitcoin, according to Cryptsy, which added the digital currency to its board yesterday. As of this afternoon, one Bitcoin was trading around $900, meaning one 42Coin is worth about $900,000. A full 42Coin has yet to be mined, and the prices are scaled up from the fractions of 42Coin that have been transacted (so don’t worry, no one has actually yet spent $900,000 on one of these babies).” Reported by Business Insider

In an interview with the development team of 42 coin, “The team is consistently working on spreading the adoption of 42 coin to be traded outside of the crypto coins markets, soon 42 Coin will be a payment method for high priced assets like vehicles, houses and properties, gold and silver (very soon), and collector’s memorabilia. Online retailers have already drawn some interest due to its high priced evaluation, and more investors are easily getting started by mining 42 Coin and trading coins so they can spend it on high priced items they want or need.”

In an interview with IBTimes UK, Published on February 4, 2014, the 42 Coin Team claims it will be “exchanged for valuable goods and services…[it] could be used towards gold or silver – this is actually in the works as we speak.” http://www.ibtimes.co.uk/think-bitcoin-expensive-try-42-coin-100000-cryptocurrency-1435107

42, the number has a long history of being known to carry out 1000x the value (For Example) Jackie Robinsons collectables such as the Glove Mr. Robinson once wore that sold for $700,000 USD. 42 Coin gives early investors a huge advantage since 42 Coin will be a collector’s item in the near-future. It certainly can be traded for higher than usual value due to its limited supply as searched on: http://www.42coin.org/news

The future behind 42 is that in a year all 42 coins will be generated by the miners who use their computers, Linux servers, and accessible hardware to get rewarded for coins. Once all coins have been generated the miners will only be rewarded with the transaction fees. Similar to Bitcoin, anyone can download the software from http://www.42coin.org to get started in mining on the network.

The estimated time that all coins will be generated is about 10.5 months from today, so time is on the essence for 42 since Bitcoin will last another 40+ years before all 21 Million coins are mined.

42 Coin’s crypto-currency launch started off as a simple experiment, and the goal is to give early adopters the ability to mine as much as possible before all 42 coins have generated. At the moment of writing this press release, 42 Coin is still known as being very rare, validating Bitcoin’s financial systems, and highest valued crypto currency.

Anyone looking to get started in mining 42 Coin, spending it, or simply holding it as a collector’s item can do so by grabbing the open source free software at http://www.42coin.org – it’s really that simple for anyone to get started with 42 Coin.

Official Logo of 42 CoinDownload Technology to start mining, sending, and receiving 42 Coin with any computer www.42coin.org

Worth 100x more than bitcoin via http://42coin.org

www.CoinMarketCap.com (Click Price Tab) and see 42coin.org listed as the highest priced crypto currency against all others