Original Content to Launch Across Social Media Channels, Inspired by Reporter and Activist Karl Schmid and Produced By AOMEDIA 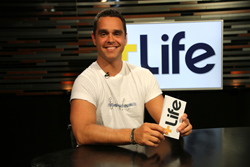 AOMEDIA today announced the launch of +Life, a new digital lifestyle brand focused on eradicating the stigma of living with HIV. Designed to inform and inspire, +Life will feature original content that is educational, entertaining, and fun. Content will be available @PlusLifeMedia across all major social media platforms, including Facebook, Instagram, Twitter and Snapchat, and at PlusLifeMedia.com.

More than 37 million people globally are living with HIV today.* While incredible advances have been made in helping HIV-positive individuals live long, healthy, and productive lives, stigma remains an unfortunate side-effect, impacting access to health care, employment, and community. Roughly one in eight people living with HIV is being denied health services because of stigma and discrimination, with myths and misinformation a large factor.**

Karl Schmid, an internationally known entertainment reporter who has been a featured talent on leading networks including KABC, ABC.com, TLC and Logo, as well as on programming in his native Australia, inspired the creation of +Life after he revealed his own HIV-positive status in a candid 2018 Facebook post. Now an activist focused on sharing his message and educating others on the realities of living with the disease, Schmid serves as +Life’s editorial director.

“I kept my diagnosis secret for 10 long years because some well-meaning people I trusted told me that revealing my status would ruin my career. Did I really want to be known as ‘the guy on TV with AIDS?’ Then one afternoon while scrolling through The AIDS Memorial Instagram account, I was inspired to overcome my fear, and decided to share my positive status,” said Schmid. “I was amazed at the overwhelming support I immediately received from loved ones and strangers around the world, and my hope for +Life, is that it helps others learn they too, have the freedom to live and love proudly, and help change stigma-induced fear common among those living with the disease in private. A positive HIV status is not something that should hold anyone back from achieving their dreams and living life to its fullest potential.”

Global studies over the past decade, continue to identify the impact of isolation among people living with HIV. In one study, 42% of HIV-positive individuals in North America said they feel especially isolated, with friends and families not really understanding the disease. While HIV stigma can lead to feelings of shame, fear, isolation, and despair, which can prevent people from getting tested and/or treatment, it can also affect population health globally, impacting HIV prevention, testing, care, and treatment.

+Life looks to change the impact of stigma of HIV, by providing smart, engaging, fun and real content that can educate and shatter stereotypes, myths and inaccuracies. The site will launch with an original weekly video series called “+Talk.” Hosted by Karl Schmid, it will feature honest conversations, empowering information, and an entertaining look at the everyday life of a person living with HIV. New content will be added every weekday across social media channels, with +Talk episodes available on YouTube one week after airing.

Additional planned programming includes interviews with newsmakers, influencers and real people, sharing personal stories, and the latest developments, as well as the latest in practical medical information. +Life will also address topics related to sex, dating and relationships, from the perspective of people living with HIV, and those who love them, as well as the efforts people are making every day to make the world a better place.

“+Life is for those living with HIV, the people who support them, and anyone at risk of contracting the disease - which is everyone,” said Executive Producers Brent Zacky and Michael Spierer, AOMEDIA. “Fear and lack of information can literally be a death sentence for people who do not get tested or are afraid to seek treatment. Our goal is to entertain while we educate, building a community and providing the facts everyone needs to lead happy, healthy, complete lives.”

Gilead Sciences has signed on as +Life’s major launch sponsor.

ABOUT AOMEDIA
AOMEDIA is a Los Angeles-based production company dedicated to telling unexpected, powerful and entertaining stories. Recent projects include +Life, a new digital lifestyle brand focused on eliminating the stigma of living with HIV, “Rich and Acquitted,” a celebrity true-crime series for REELZ, and GSN’s “Cover Story,” a look behind the biggest headlines from TV’s most popular shows. AOMEDIA is co-founded by Brent Zacky, a television executive who developed and produced programming for entertainment brands including E! Networks, TLC and Logo, and Mike Spierer, a showrunner and media executive with experience in scripted and unscripted content who has managed the launch of channels worldwide.