A Right To Carry Everywhere, On A Road To Nowhere

A 9th Circuit panel recently upheld a right to public carry, just as Supreme Court nominee Brett Kavanaugh advocated for AR-15s: both applied “textualism.” To stop the Gun Epidemic — like yesterday’s Walmart mass shooting and Chicago’s latest 5 mass shootings in 3 hours — it’s time to turn a spotlight on the root cause: oversights of text and legal carelessness, says Robert W. Ludwig of the American Enlightenment Project. 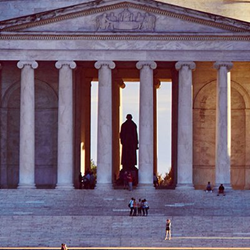 'With progress of the human mind,' as it 'becomes more enlightened, new truths discovered ... institutions must advance.' Thomas Jefferson

In a timely article, “A Right To Carry Everywhere, On A Road To Nowhere” (Law360 Aug. 10, 2018), Robert W. Ludwig, counsel to the American Enlightenment Project, points out that “to end the senseless Gun Epidemic, it’s past time to turn a spotlight on its root cause: legal carelessness and oversights of text even nonlawyers can’t miss.”

After a 5-4 Supreme Court in D.C. v. Heller (2008) found for the first time in 200 years a Second Amendment right to possess a gun, extended to the states in McDonald v. Chicago (2010), proliferation and deaths skyrocketed, creating by 2015 a declared Gun Epidemic. “Thanks to two court decisions,” Mr. Ludwig writes, “the nation has become an abattoir of worsening handgun violence, daily mass shootings and weekly school shootings, triggering a March for Our Lives.”

“Celebrated as a ‘vindication’ of ‘textual originalism’ by the late Justice Antonin Scalia, Heller is more a testament to the folly of legal word-play, and how that superficial dictionary-based doctrine is no substitute for understanding essential to judging.”

“Most glaringly,” Mr. Ludwig points out, “Heller never addressed the meaning of the last clause and verb on which the amendment rests.” Instead, Justice Scalia transposed “shall not be infringed” to “abridged,” though not synonyms, like changing “shall not kill” to “maim.” “Abridge, a forgotten term of art, was used in the First Amendment and every amendment since that protects individual rights. Infringe, another term of art, was used in its classic sense to protect state sovereignty.”

Overlooking pivotal text is “probably the strongest reason for not following a decision,” the California Supreme Court said in 2015 when correcting a 140-year oversight “‘announced in ignorance’” of an 1872 statute, “a remarkable failure of the adversary system,” like Heller. Noting “It is better that wisdom, or at least controlling authority, come to our attention late, rather than not at all,” the court held that because “the relevant language and history” was not applied, its prior case “cannot stand.” Likewise, notes Mr. Ludwig, “having not construed the full text, among many things in plain sight, there is no legal way Heller can stand.”

Yet three weeks ago, Heller’s right to “handgun possession” and “to carry it in the home,” its odd precise holding, was extended to public carry by a 2-1 Ninth Circuit panel in Young v. Hawaii, applying mostly textualism to reason that “keep” arms “necessarily implies a right to carry those arms to some extent,” and “bear” arms “should protect something more than carrying incidental to keeping arms,” ergo “some level of carrying” for “conflict outside the home.”

Meanwhile, the Senate considers the nomination of Judge Brett Kavanaugh, the dissent on a 2-1 D.C. Circuit panel that upheld a ban on assault weapons like the AR-15s used in school massacres. Judge Kavanaugh read Heller’s “text” to mean, since “the vast majority of handguns are semi-automatic” and there’s “no meaningful constitutional distinction between semi-automatic handguns and semi-automatic rifles,” it “follows” AR-15s are protected as “the most popular semi-automatic rifle.”

“Expanding Heller and its epidemic to public carry as textualist courts insist,” Mr. Ludwig observes, “can only make more commonplace a mom pulling a gun over that last back-to-school item as went viral last August, or the customer shot dead over a parking space two weeks ago in Florida: practical results of mixing everyday grievances with ready guns. More dystopian still would be a textualist Kavanaugh court that allows everyone who wants one an AR-15.”

“Much of the problem,” Mr. Ludwig writes, is “lawyers and judges do not understand rudimentary founding history and concepts, even those still applied today." For example: "They blithely assume 'infringe' protects a private right, as in 'patent infringement.' That, like all easy assumptions about the amendment, would be wrong." The authority? Heller's staunchest defender, Justice Clarence Thomas, who wrote in April for a near-unanimous Supreme Court: "This Court has long recognized the grant of a patent is a 'matter involving public rights'" or "public franchises," not "private rights."

Mr. Ludwig concludes: “Heller’s blunders are not only a serious legal and public safety problem, but an institutional one. The Court’s authority depends on public confidence, which is lost when it misses something as simple as constitutional text and leaves it uncorrected.” And "should the Ninth Circuit reconsider Young en banc," one question should be "whether Heller prevents deciding the full Second Amendment, which plainly has nothing to do with an individual right."

For the article, visit http://www.ludwigrobinson.com/RoadToNowhere.pdf.

The American Enlightenment Project (http://www.americanenlightenmentproject.org), is a nonprofit dedicated to ending the gun epidemic now, and to challenging conventional wisdom and the two court decisions that triggered it.

Mr. Ludwig is a member of Ludwig & Robinson PLLC (http://www.ludwigrobinson.com), a law firm based in Washington with an office in Detroit, and affiliate in Germany. The firm has a national and international practice in trial and appellate litigation.