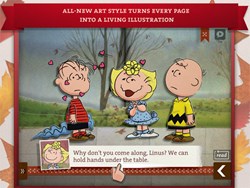 The illustrations come to life through an all-new art style.

While creating a playful experience was important, so too was portraying the moral of this holiday story.

Everyone’s favorite animated Thanksgiving classic has been reimagined for modern audiences, thanks to a new digital story app developed by Loud Crow Interactive. Available for purchase today exclusively in the Apple iTunes App Store, A Charlie Brown Thanksgiving is the fourth Peanuts television special to be given an interactive spin from Loud Crow, an award-winning children’s interactive publisher based in Vancouver, BC.

Released in honor of the animated special’s 40th anniversary, A Charlie Brown Thanksgiving blurs the line between an animated storytelling experience and an interactive handheld toy. Poignant yet playful, today’s release features dozens of responsive graphics and tactile elements designed to appeal and engage a child’s natural sense of wonder and curiosity.

“The original A Charlie Brown Thanksgiving animated special is yet another timeless classic,” explains Calvin Wang, Founder and CEO of Loud Crow Interactive. “And we’re absolutely delighted to be able to celebrate the 40th anniversary with this fun and engaging interactive app.” The app is also a great way for parents to teach their children about the true meaning of the holiday. “While creating a playful experience was important, so too was portraying the moral of this holiday story.”

“As we continue to build our digital footprint for Peanuts, creating innovative and beautiful apps from Loud Crow, is a logical strategy, particularly for a classic that everyone has grown to know and love,” said Leigh Anne Brodsky, Managing Director of Peanuts Worldwide. “The Thanksgiving app marks the fourth in our partnership with Loud Crow, and it’s perfectly timed to the 40th anniversary of the popular holiday special.”

“Stylistically, a physical representation of a book – with page curls, texture and borders – made a lot of sense for a story as nostalgic and heart-warming as A Charlie Brown Thanksgiving,” explains Pun. “But don’t be fooled – beneath that old school look is an impressive amount of engineering and design savvy.”

Optimized for iPhone 5 and iOS 7, A Charlie Brown Thanksgiving boasts:

A Charlie Brown Thanksgiving is available worldwide exclusively in the “Books” and “Kids” areas of the App Store today for $5.99 USD or equivalent amount in other currencies. Click here to purchase.