Contrary to common stereotypes, a recent survey of men and women conducted by online dating website SugarDaddyForMe.com shows women are overtaking men in how sexually adventurous they describe themselves to be. 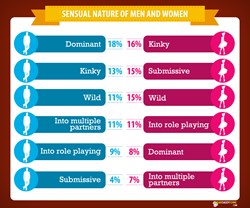 Sensual Nature of Men and Women

While men’s preference was for longer foreplay than women, it was just the opposite when it came to the amount of time they each prefer intercourse to last.

When it comes to ‘doing the deed’, 76% of the men responding expect intercourse to be part of any relationship, while only 18% of women have the same expectation. But surprisingly, the men prefer a longer period of foreplay than the women! For example, six times more women than men say that "the shorter the foreplay the better." Reinforcing this surprising result, more men (38%) than women (21%) say that they prefer foreplay to last between at least 30 minutes to more than an hour. The majority of both genders consider that the optimal amount of foreplay is between 15-30 minutes.

And with other stimulants thrown in the intercourse mix, the online dating website found men surpassed women in their preference for using toys and/or male enhancements, having intimate relationships with multiple people at once and oral stimulation.

To view the full results of this eye opening survey on the attitudes of men and women regarding intimacy, please visit http://www.sugardaddyforme.com/.

Online dating website, SugarDaddyForMe.com is the World’s Largest Sugar Daddy Matchmaking, Personals and Dating service with over 4 million members. Since launching in 2005, the website has set the mold for the sugar daddy cultural phenomenon with the goal to bring together successful, generous men and attractive young women that love to be pampered, spoiled and supported. Recently featured in MTV's True Life episode "I Am a Sugar Baby ", two episodes of both The Montel Williams Show and The Tyra Banks Show, Good Morning America, The New York Times and numerous other TV shows, publications, documentaries and anthropological studies, SugarDaddyForMe.com is the world’s largest online dating website for sugar daddies and sugar babies looking for mutually rewarding relationships.

Agreement of men and women with sensual stimulators