Yengo hopes crowdfunding will give him the resources to create a documentary and provide training for entrepreneurs in Congo. Last year he trained over 400 entrepreneurs who launched several businesses in Africa that are thriving and growing today. 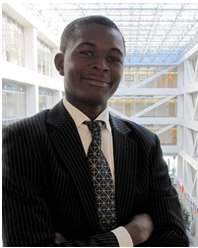 I hope by creating The Power of a Dream and having it available to both Africans and the entire world that people will begin to understand that Africans need skills, and not just food and clothing.

Vulcain Minerve Yengo, known by his friends as Yengo, is a Congolese student at Brigham Young University-Hawaii. He has recently launched an ambitious crowdfunding campaign on Indiegogo.com to raise $27,000 (see http://www.igg.me/at/powerofadream). His lofty campaign is to create a documentary titled, "The Power of a Dream", which shares how entrepreneurism is being used to bring a “wind of change” to Africa.

Yengo grew up in the small town of Brazzaville located close to the river Congo in the Republic of Congo. Yengo's childhood was fraught with hunger and poverty. Though his parents worked hard to take care of their family of 11, the most they could make in any given day was a little under $2. This amount barely allowed for Yengo and his siblings to eat, let alone provide for other necessities.

At the age of 15, Yengo started his first business selling household lamp oil, cloths, and juice on the streets of Brazzaville. Though he worked hard at building his first business in the end it failed because of the continual rise in oil prices and the complexity of the business. Yengo recalls, “I think I had a heart for business, but I did not have a head for business yet.”

Now with his degree in Business Management, Yengo is striving to create a movement behind a new hybrid of African entrepreneurs – change makers with a mind for business. It is Yengo’s belief that entrepreneurship with heart will bring the real freedom that his continent is seeking.

Through his efforts Yengo hopes to inspire and empower a million Africans. He plans to do this through his documentary and by offering hands on training courses in entrepreneurism. Last year Yengo went back to the Republic of Congo to conduct a pilot program for his entrepreneurship training courses. The results from his program trained more than 400 people in different skill set and helped launch several African businesses that are thriving and growing today.

That trip and seeing the impact the training had on many successful Congolese entrepreneurs, he was inspired Yengo to create the "Power of a Dream" documentary. For example, Verone Mankou, is a 25 year old Congolese, who is the first African to create a tablet and a smart phone. “Verone amazed me because he was able to create something for our country that will have a significant impact in business and with fewer resources then most European and U.S. technology companies. He made history, but who knows about him?”

Each entrepreneur Yengo met in Congo had a similar amazing story to tell. He saw how he could be a source of empowerment, hope, and confidence for many more Africans. Yengo wants to capture these stories in his documentary and freely make them available to anybody via the Internet. “I hope by creating The Power of a Dream and having it available to both Africans and the entire world that people will begin to understand that Africans need skills, and not just food and clothing.”

Support Yengo’s dream by supporting his campaign on IndieGoGo.com or participating on his Facebook page. All proceeds go to creation of The Power of a Dream and helping African entrepreneur succeed.

The Power of a Dream - train and inspire a new generation of African entrepreneurs - fund the crowdsourced campaign www.igg.me/at/powerofadream

How the funds will be allocated.