The man National Geographic dubbed "The Godfather Prepper" says having emergency backup power is a top priority & an AIMS Power inverter is his tool of choice. 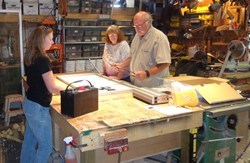 The man National Geographic dubbed "The Godfather Prepper" — Dennis Evers says having an AIMS Power inverter should be first on your checklist for National Preparedness Month in September..

I’m just ecstatic with AIMS, and don’t mind letting people know because it’s affordable, they’re quality and have great service. There’s nothing more you can ask for. — Dennis Evers

September is Federal Emergency Management Association (FEMA) National Preparedness Month, and Dennis Evers might just be one of the most prepared men in America.

What's Evers' secret? Part of it is having an AIMS Power Inverter for an emergency backup power system, because it's necessary in preparing for just about anything.

Evers’ preparation skills were made famous on National Geographic’s popular show "Doomsday Preppers", and he says that behind food, water, and shelter — having electricity is essential in a disaster situation.

"Psychologically, I believe it’s essential to be able to see a light go on when you flip the switch," Evers said. "Watching television, cooking, turning on a reading light, playing games or using appliances are activities that will divert your attention from whatever the disaster may be and help you get through it."

A heavy wind could knock the power out for a day or maybe a week; an earthquake could render you powerless for a month; a hurricane could kill electricity for six weeks, but Evers says that most people aren’t prepared for any level of disaster.

"We had a power outage here (in southwestern Colorado) that lasted fourteen days and all the pipes burst on the people that didn’t have backup power," Evers said. "They lost all their pipes and all the plumbing in their house, because it was frozen.

"We didn’t have to worry about it because we had our inverter and backup power — we were ready to roll."

Evers, 59, built a backup power system with a 2500 watt AIMS Power inverter, four deep-cycle batteries and a solar panel all fitted into a truck box with wheels — a homemade solar generator.

He just pulls it up to his house and plugs it in whenever there’s an outage. He also uses the solar generator for mobile power, pulling it behind a garden tractor wherever he needs power on his acreage.

"I’m not a doomsday prepper," Evers said. "I’m a pragmatist."

Whether known as a doomsday prepper, a college grad in criminology or a 12-year veteran of the police force and former police chief, one thing is clear: Evers knows how to be prepared for anything.

He’s sold about 150,000 copies of his book "Pocket Partner", which provides info on emergency response procedures for seemingly every situation possible, and more than 100,000 of those sales have been to government agencies such as the Secret Service, CIA, FBI, countless police forces, fire fighters, paramedics, etc.

"It’s not an issue of doomsday," Evers says. "We don’t sit around being terrified there’s going to be a major event, but we’re simply ready and know what to do if something happens.

"But I’ve learned in my 45 years of being in the preparedness business that most people aren’t ready; they’re going to buy generators at the department store and when they look over their shoulder, the storm clouds are already right above them."

Evers won’t be seen in the herds of Home Depot shoppers scrambling to buy the last generator in stock.

He’ll be switching on his 400 watt AIMS Power inverter, pulling power from a standard car battery and powering 14 LED lights that he says is enough to light is whole living room. That combined with his solar generator is enough to power his basic needs.

"It’s a cool thing I’ve got my house on a power switch so when the power goes out, I roll that puppy (solar generator) up, pull out an extension chord to plug it in, turn off everything but what I need, and I’m running my AIMS inverter to use my lights, aquarium pumps, and stuff that needs to be run while the power’s down," Evers said.

"I’m just ecstatic with AIMS and don’t mind letting people know, because it’s affordable, they’re quality and have great service — there’s nothing more you can ask for."

So the product that should be on everybody’s shopping list for FEMA’s National Preparedness Month: an AIMS Power inverter for emergency backup electricity.

"My solar generator with that AIMS inverter in it has been outside for five years in the cold, 20 below zero weather, and I can turn it on right now and get a green signal with 120 volts," Evers said. "I have no problem standing behind AIMS, and if I don’t like a product, you’d never hear me talk about it."

AIMS has become a multimillion dollar company because of commitment to the inverter industry. Inverters will be sold worldwide regardless, but innovation combined with excellent customer service separates AIMS Power from the competition.