Veteran wide receiver Quinn Early launches foundation AnnEarlyIntervention.org on the heels of fall book tour that began in San Diego and comes full circle in Iowa after a stop in New Orleans to visit the Saints defeating the Rams. Mr. Early shares his passion for resources for Alzheimer's prevention and early detection in Hawkeye state speaking/media tour with book signings and interviews. 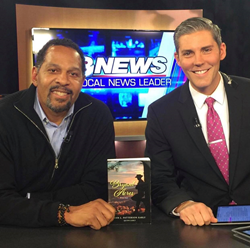 Quinn Early on the News in Iowa

Quinn Early will tell you why he’s so passionate about what he’s doing now which is educating individuals about Alzheimer’s, Dementia and the importance of early detection of both diseases. His mother is the co-author of Bryant Acres, A Love Story with Quinn. Bryant Acres is a Love Story about Quinn’s Great-Grandfather 7 generations back, Sherrod Bryant during the time of slavery in the South.

The synopsis of the book is the stuff that movies are made of, “At the height of slavery in the antebellum south, a free man of color sold himself into indentured servitude. He found love and went on to become one of the wealthiest land owners of the time, and in the process built a multi-racial community.”

It was this story, found within the pages of “Bryant Acres”, that inspired Ann Early to write the stories Quinn had always heard about as a kid growing up in New York.

Quinn’s mother was diagnosed with Alzheimer’s as she was writing the book. Quinn’s focus on Alzheimer’s research and prevention was motivated by this diagnosis. While the book is not about Alzheimer’s, it is the reason Quinn is making it his life mission to help end the disease. “I promised my mom that I would help her get the story of Sherrod Bryant and Bryant Acres out to the world. Understanding the full story and learning about the hero that he was and seeing that heroism lived out through the life of my mother play out like a movie, is now my passion and mission,” Early stated.

Quinn’s speaking platform is being defined by the growing and alarming statistics of Alzheimer’s and dementia. According to the Alzheimer’s Association, “An estimated 5.7 million Americans of all ages are living with Alzheimer's dementia in 2018. This number includes an estimated 5.5 million people age 65 and older and approximately 200,000 individuals under age 65 who have younger-onset Alzheimer's. One in 10 people age 65 and older (10 percent) has Alzheimer's dementia.” For more information about Alzheimer’s disease and available resources, visit alz.org.

About Quinn Early
Quinn was born in Long Island, New York. He grew up in the theater where his mother, Dr. Ann Early, was a play writer. Quinn received an education in acting at a very young age. He always knew that he wanted a career in the performing arts, however had a detour along the way. The NFL became his stage in 1988 when Quinn played wide receiver for 12 years.

After retiring, Quinn worked in the sports nutrition industry and worked with kids helping them to achieve their athletic goals. In 2011, Quinn was inspired by his mother to get back into acting and stunt work. He appeared in his first movie in 2012 and has been working in film ever since. He became part of SAG/AFTRA in 2014 and has appeared in many films and television shows.

About Ann Early
Ann was born in Tennessee in 1937, one out of eight children and her family moved to Detroit Michigan when she was in grade school. In 1956, Ann and her husband Judge moved to New York and began to raise a family. During these years, Ann wasn’t just a wife and mother, but also started a successful foundation. The foundation's focus was to help underprivileged youth have an opportunity to channel their talents and energy through the performing arts. Ann was a play writer and director. She built a very successful play group on Long Island called Writer’s in Residence.
After raising her family, Ann decided to fulfill her promise to her grandmother, Big Mama by writing a book about the famed indentured servant Sherrod Bryant. Ann spent many years traveling to Tennessee where she did extensive research. Combined with the years of stories told to her by Big Mama, Ann completed her book. Unfortunately, she didn’t have an opportunity to complete her mission of telling this great American story. In 2008, Ann was diagnosed with Alzheimer’s and passed away in 2013. Her youngest son Quinn promised her that he would tell the story of Sherrod Bryant. Quinn is gladly carrying the torch for his mother.

The story of Sherrod Bryant is a story of perseverance and racial harmony; that all people have value regardless of race or economic standing. Sherrod Bryant was a young man who had very humble beginnings. He wanted to become a gentleman farmer. He not only achieved that goal, Sherrod would go on to become one of the most successful land and plantation owners in the South during the 1800’s. The fact that he accomplished this isn’t the amazing part. What’s amazing about Sherrod Bryant’s story is the fact that he was a successful man of color during slavery.

Bryant Acres: A Love Story is available on Amazon and other platforms https://www.bryantacres.com/thebook/
For Speaking Inquiries and media Interview Requests contact: Michelle Borquez 615.497.3211