SMi Reports: Alzheimer's 2016 to Spotlight on Tau Aggregation this May in Central London 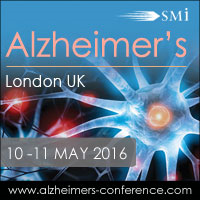 According to recent reports, the global market for Alzheimer’s treatment will double in value from $4.9 billion in 2013, to an estimated $13.3 billion by 2023, with Tau aggregation inhibitors being one of the latest Big Pharma approaches to treatment. This latest line of emerging technology plays a vital role in reviewing alternative strategies for therapeutic intervention.*

Hear more on pioneering developments at Alzheimer’s 2016, where SMi Group are delighted to welcome the expertise of TauRx Therapeutics who in recent months, completed a US$135m financing round to support a Phase 3 Clinical Trials Program in Alzheimer's and Frontotemporal Dementia.*

Executive Chairman, Claude M Wischik, will present results on clinical trial performance from the LMTX Tau Aggregation inhibitor with further insight into biomarker diagnostics and potential clinical scope. Other event highlights will include a keynote address from Eli Lilly, who will delve further into tau transgenic models and progressive tau pathology; plus UCL's talk on in vivo multi parametric MRI imaging of tau pathology in mice.

Alzheimer's 2016 will look to focus on the latest approaches to drug development in Alzheimer's with medical prospects, by providing an understanding of the key drivers in the neurodegenerative disease. The scientific agenda will include case studies on disease progression; the EPAD project; Europe's collaboration to address industry challenges - COMPACT; Alzheimer's pathogenesis in down's syndrome plus more.

Other featured speakers on the programme include:

For those who are interested in attending, there is currently a £400 earlybird saving available online which ends on 29th February.

Established since 1993, the SMi Group is a global event-production company that specializes in Business-to-Business Conferences, Workshops, Masterclasses and online Communities. We create and deliver events in the Defence, Security, Energy, Utilities, Finance and Pharmaceutical industries. We pride ourselves on having access to the world’s most forward thinking opinion leaders and visionaries, allowing us to bring our communities together to Learn, Engage, Share and Network. More information can be found at http://www.smi-online.co.uk