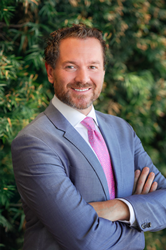 "It is an honor to join Hiep Tran and the entire Amare organization. Amare is poised to be a key contributor within the mental wellness category with massive opportunities for growth,” said Turner.

Amare Global, the category leader in all-natural mental wellness solutions, is pleased to announce the appointment of Jared Turner to the role of Chief Executive Officer. Turner will be joining Amare with nearly two decades of domestic & international leadership experience in natural products & the direct selling channel. In addition, Amare's Founder & CEO, Hiep Tran, will step up into his new role of Founder & Chairman.

"Our vision at Amare is to be the largest mental wellness company in the world. To achieve our vision, we set out to add additional strength to our executive team," said Amare Founder & Chairman, Hiep Tran. "Jared's leadership and experience are what we've been looking for to take Amare to the highest level. I am excited about the massive growth in front of us. I'm also enthusiastic about entering my new role as Chairman. My belief and commitment to what we are building have never been higher. I will continue to define our vision for the future while working closely with Jared on our growth strategy."

Turner joins Amare at an exciting time. In Q2 2021, revenues grew 60% over Q1. New account acquisitions grew by 189% in the same period. Currently available and distributed in the United States and Mexico, Amare is poised for exponential growth with unlimited potential to open additional international markets. Many of Amare's 23 all-natural products have achieved recognition at Expo West's NutrAwards and the NutraIngredients-USA Awards.

"It is an honor to join Hiep Tran and the entire Amare organization. The core values of the organization align with my own in every way. I believe Amare is poised to be a key contributor within the mental wellness category with massive opportunities for growth, both in the United States and throughout the globe," said Turner. "The last few years have shown the world is in need of the product solutions and community offered by Amare. Hiep and his team have created an inspiring brand that has blessed many lives. I'm eager to take Amare to the next level working closely with Hiep, the executive leadership team, and field leaders, as we expand on the founding vision of becoming the largest Mental Wellness Company® in the world, inspiring millions of people to live their best lives."

About Jared Turner
Turner has nearly two decades of business and entrepreneurship experience. He most recently served as President & Chief Operating Officer of a Top 10 DSN100 direct-selling company. In his eight years of leadership there, annual revenues grew from $200 million to over $2 billion. Prior to that, Turner spent years at a large international law firm assisting large multinational clients, including several network marketing companies, with their overseas expansion efforts. In addition, he is a born entrepreneur, having built several of his own purpose-driven independent companies. Turner speaks three languages, holds a master's degree in international relations from the Maxwell School at Syracuse University, a law degree from Syracuse University College of Law, and two bachelor's degrees in Spanish and political science from the University of Utah.

About Hiep Tran
Tran has over two decades of entrepreneurship & leadership experience. In 2008 he Co-Founded Meritus Payment Solutions. It rapidly grew to be one of Orange County's fastest-growing companies. Meritus was acquired in 2014 for $225 million by Paysafe Group. In the acquisition, Tran became CEO of Payment Processing for Paysafe. In the following two years, he led Paysafe to a valuation of over $3 billion. Tran resigned from Paysafe in 2016 to launch Amare Global, The Mental Wellness Company®.

About Amare Global
Amare Global® (amare.com) was founded in 2016 as The Mental Wellness Company®. It is the category leader in the $121 billion market of mental wellness. Privately held and funded, Amare is one of the fastest-growing companies in natural health products and direct selling. In addition, it empowers financial wellness through its entrepreneurial business opportunity. Amare's patented and award-winning products are formulated on the science of the microbiome, gut-heart-brain axis, and ancient wisdom.