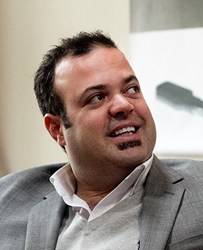 With Sound Band™, the need to remove headsets or earbuds to hear what is happening around you becomes obsolete

“We like to draw the analogy of Sound Band™ delivering a home-theater system experience. For example, you can still engage with others around you, hear the doorbell, baby monitor, and traffic, but at the same time be listening to - in stereo - your chosen audio,” explained Ryan Wells, Managing Director of Hybra. “With Sound Band™, the need to remove headsets or earbuds to hear what is happening around you becomes obsolete.”

Sound Band™, the company says, has applications beyond personal use, with its enhanced communication features suitable for language translation services, museum tours, private security, and theme parks, along with military and police communication.

Dr. Jonathan Fisher, Doctor of Cochlear Mechanics in the Laboratory of Sensory Neuroscience at The Rockefeller University, has been researching better and safer alternatives to the use of earbuds and headphones.

He has said of Sound Band™:

“When you listen to conventional headphones, particularly the earbud style, because the speaker is so close to your eardrum you actually run the risk of rupturing the eardrum when you’re listening to extremely loud sounds.

“With Sound Band™, sound is conducted through the bone and the tissue in your head, and in the process your body organically shapes the quality of the sound. Because the sound waves bypass the eardrum, you eliminate the risk of doing any damage there.”

Hybra’s goal for the Sound Band™ Kickstarter campaign is $175,000, which has been earmarked by the company to meet the costs associated with final audio tuning, wireless certifications including FCC and Bluetooth, audio software uploads, component assembly, and packaging.

There are 14 levels of pledges to choose from, starting with just $1 to help get the project going, and up to $5,500 for a truly unique experience with the Hybra team.

We are looking forward to having the support of members of the international Kickstarter community who continually show their willingness to put their collective weight behind the advancement of new technology,” said Mr. Wells.

The Kickstarter campaign for Sound Band™ can be accessed at http://www.kickstarter.com/projects/hybratech/sound-band-finally-a-headset-without-speakers.

Hybra is a product development company headquartered in Traverse City, Michigan. Dedication to excellence, continuous improvement, on-going research into emerging technologies, and a firm belief in the entrepreneurial spirit are the driving forces behind our commitment to technology development.

Sound Band™ is the long-awaited solution to ear buds. It is a wireless headset that uses surface sound technology (not speakers) to deliver sound to both ears, while leaving ears open to the ambient environment. With Sound Band™, there is no longer any need to remove your ear buds to have a conversation, order your third grande latte of the morning, or listen for your stop on the train! With Sound Band™, you can still hear the world around you, but the world around you cannot hear your Sound Band™.