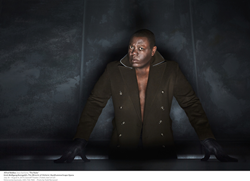 Alfred Walker as "The Ruler"

“Korngold’s music had always been rich and sensual, but he outdid himself in Heliane.” —The Guardian

Opening on Friday, July 26, Bard SummerScape presents the long overdue American premiere of The Miracle of Heliane (“Das Wunder der Heliane,” 1927). An original staging by German director Christian Räth of the grand opera that Erich Wolfgang Korngold considered his masterpiece, “this show promises everything: symbolism, eroticism, political intrigue and gorgeous orchestration, all done up in the composer’s signature ‘more is more’ musical style” (New York Observer). Featuring Ausrine Stundyte, Daniel Brenna, Alfred Walker and the American Symphony Orchestra under the leadership of festival co-founder and co-artistic director Leon Botstein, The Miracle of Heliane will be sung in German with English supertitles and will run for five performances between July 26 and August 4, with an Opera Talk, free and open to the public, before the matinee on July 28. SummerScape 2019 also provides the chance to sample some of the operettas written and arranged by Korngold and his contemporaries in “Operetta’s America” (August 11) and to see a semi-staged production of his best-loved opera, Die tote Stadt (“The Dead City”; August 18), during the 30th anniversary season of the Bard Music Festival.

Anchored by the Bard Festival Chorale under the direction of James Bagwell, all three presentations take place on Bard’s glorious Hudson Valley campus in the striking Frank Gehry-designed Fisher Center. As the New York Times notes, “Bard has become a haven for important operas.” Click here to see a celebration of opera at Bard SummerScape.

The Miracle of Heliane (“Das Wunder der Heliane,” 1927)
Erich Wolfgang Korngold (1897–1957), whose lush Romanticism would come to define the quintessential Hollywood sound, began his career as a classical prodigy in fin-de-siècle Vienna, becoming a respected opera composer at just 19. Yet, despite the success of his first three operas, the fourth – The Miracle of Heliane (“Das Wunder der Heliane,” 1927) – was dogged by difficulties from the outset, and today, almost a hundred years later, has still never been staged in the United States. This represents a considerable loss. Heliane features “Ich ging zu ihm,” one of Korngold’s best-loved arias, and many agree with the composer’s assessment of the opera as his most important work. Styling the opera “a huge, triumphant song of love and liberation on the grandest scale,” The Guardian explains: “Korngold’s music had always been rich and sensual, but he outdid himself in Heliane.” Indeed, for Brendan G. Carroll, President of the International Korngold Society, Heliane is not only “arguably the composer’s greatest work,” but also one that stands “among the masterpieces of Romantic opera.”

Heliane’s sets and costumes are the work of Esther Bialas, the Berlin-based designer behind Barrie Kosky’s electrifying production of The Magic Flute. Heliane also features choreography by Catherine Galasso, whose work has been nominated for both “Bessie” and Isadora Duncan Dance Awards; lighting design by Thomas Hase, as seen at LA Opera, New York City Opera, and BAM Next Wave; and projections by Elaine McCarthy, whose work for the world-premiere production of Moby-Dick prompted the New York Times to marvel: “What truly set this production apart were Elaine J. McCarthy’s innovative projections.”

Lithuanian soprano Ausrine Stundyte will make an all-too-rare U.S. appearance in a reprise of the title role in which she recently gave a “transcendent performance” (Bachtrack) in Belgium. She is perhaps best-known for her debut in the Berlin State Opera’s Salome last year, where her “full-blooded, searing performance, replete with musical and psychological nuance,” impressed Opera News as “sensational.” The role of the Stranger will be sung by Wagner Award-winner Daniel Brenna, “one of the best-known heldentenors of his generation” (Opera Wire), with the Ruler of bass-baritone Alfred Walker, who proved “outstanding” as Wagner’s Flying Dutchman in Basel, where his interpretation impressed Germany’s Die Welt as being both “fiery and chilling.”

“Operetta’s America,” Bard Music Festival Program 6
Korngold enjoyed a second, more lucrative career as an expert adapter and expander of classic Viennese operetta, and it was he who spearheaded the Johann Strauss II revival of the 1920s. Working with famed director and producer Max Reinhardt, he achieved his greatest success with Rosalinda, a restructured version of Die Fledermaus that – with choreography by George Balanchine and initially with Korngold himself conducting from the piano – ran for more than 600 performances on Broadway. The New World not only provided new audiences but also new inspiration for operetta, as the works excerpted in the Bard Music Festival’s Program Six, “Operetta’s America,” reveal. These include such rarities as Leo Fall’s Rosen aus Florida, which Korngold recreated from incomplete sketches provided by the composer’s widow; The Dollar Princess, also by Fall, and adapted by musical theater legend Jerome Kern; Emmerich Kálmán’s Die Herzogin von Chicago, which mingles Viennese waltz with jazz; and Oscar Straus’s Hochzeit in Hollywood, the basis for a subsequent musical film. “Operetta’s America” features “breathtaking” South Korean soprano So Young Park (Arts Beat LA), “outstanding” mezzo-soprano Rebecca Ringle Kamarei (Washington Post), tenor and 2019 Metropolitan Opera National Council Auditions semi-finalist Joshua Wheeker, and “impeccable” baritone Tyler Duncan (New Yorker). They will be joined by members of the Bard Festival Chorale, choral director James Bagwell, and Bard’s graduate training orchestra, The Orchestra Now (TŌN), under the baton of Zachary Schwartzman.

Korngold’s Die tote Stadt (1920), Bard Music Festival Program 12
In the years between the wars, Korngold was, after Richard Strauss, the most performed opera composer in the German-speaking world, due in no small part to the sensational success of his first full-length opera, Die tote Stadt (“The Dead City”). Composed in his early 20s to a libretto that he wrote under a pseudonym with help from his father, Die tote Stadt soon dominated the opera scene. Already a hit at its simultaneous premieres in Hamburg and Cologne, the work went on to triumph in Vienna, Berlin, and New York, where it was the first new German-language opera to be mounted at the Metropolitan Opera since the beginning of World War I. Based on a novel by Belgian Symbolist poet Georges Rodenbach, Die tote Stadt is a heady, haunting story of love and obsession that suffuses the idioms of Mahler’s Vienna with the lyricism of Italian verismo, inspiring some of Korngold’s most intoxicating music, including such beloved arias as “Mariettas Lied” and “Pierrots Tanzlied.”

Anchored by TŌN under Botstein’s leadership, Bard’s semi-staged production of the opera is by Brooklyn-based opera, theater, and film director Jordan Fein, the winner of three Cannes Lions awards, with sets by Wasserman Award-winner Stephan Moravski and lighting by Obie and Lucille Lortel Award-winner Mark Barton. Soprano Allison Oakes, who swept the 2010 International Lauritz Melchior Wagner Competition, stars as Marie/Marietta, the dual role in which she proved herself “a singer who could scale the heights of Korngold’s music with soaring beauty” (Bachtrack) in Hamburg last fall. Tenor Clay Hilley, acclaimed by the New York Times for his “vocal heft, clarion sound and stamina,” returns to Bard to sing protagonist Paul, after headlining Dvořák’s Dimitrij at SummerScape 2017. Alexander Birch Elliott, whose baritone impressed the New York Times with its “heated intensity and beguiling timbre of mahogany,” rounds out the trio of principals as Paul’s friend Frank/Fritz.

Libretto by Hans Müller-Einigen, after “The Saint” by Hans Kaltneker
Sung in German with English supertitles

Opera and operetta in the 30th Bard Music Festival, “Korngold and His World”

Tickets for all Bard SummerScape events are now on sale. For tickets and further information on all SummerScape events, call the Fisher Center box office at 845-758-7900 or visit fishercenter.bard.edu/summerscape.

Venues:
SummerScape opera, theater, and dance performances and most Bard Music Festival programs are held in the Sosnoff Theater or LUMA Theater in Bard’s Richard B. Fisher Center for the Performing Arts, designed by Frank Gehry and celebrated since its opening as a major architectural landmark in the region. Some chamber programs and other BMF events are in Olin Auditorium, and the Spiegeltent has its own schedule of events, in addition to serving as a restaurant, café, and bar before and after performances. Film Series screenings are at the Jim Ottaway Jr. Film Center in the Milton and Sally Avery Arts Center.

New York City Round-Trip Coach Transportation:
To make a reservation on the round-trip SummerScape coach provided exclusively to ticket holders for specific performances indicated by * in the listings above, call the box office at 845-758-7900 or select this option when purchasing tickets. The round-trip fare is $40 and reservations are required. The coach departs from behind Lincoln Center, on Amsterdam Avenue between 64th and 65th Streets. Find additional details at: fishercenter.bard.edu/visit/transportation.

Full Schedule:
For a complete schedule of SummerScape and Bard Music Festival events (subject to change), follow the links given below. Updates are posted at the festival web site fishercenter.bard.edu/summerscape.
Fisher Center members receive priority access to the best seats in advance, and those who join the Center’s email list receive advance booking opportunities as well as regular news and updates.

Tickets and Subscriptions: fishercenter.bard.edu/boxoffice; or by phone at 845-758-7900. Tickets to all mainstage events start at $25.

Updates: Bard’s “e-subscribers” get all the news in regular updates. Click here to sign up, or send an e-mail to fishercenter@bard.edu.

All programs are subject to change.

The 2019 SummerScape season is made possible in part through the generous support of Jeanne Donovan Fisher, the Martin and Toni Sosnoff Foundation, the Board of The Richard B. Fisher Center for the Performing Arts at Bard College, the Board of the Bard Music Festival, and Fisher Center members, as well as grants from the National Endowment for the Arts and the New York State Council on the Arts with the support of Governor Andrew Cuomo and the New York State Legislature.
#    #    #