AMG services has collected the Best Bar None award as the Bournemouth O2 Academy is crowned Best Entertainment Venue in the United Kingdom for 2013 by MusicLoversBlog.com 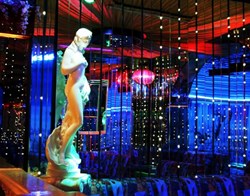 By Kurt Jones - This month one of AMG services most recently acquired live music venues has been recognized for the professionalism of the staff, service provided to visitors and the quality of live music acts which are booked, according to the Musicloversblog.com.

The Academy Music Group is the UK’s leading name in live music venues and clubs in the UK. AMG services extend to some of the most prestigious live music venues in the British Isles. AMG currently owns and operates 26 O2 venues in England and Scotland, in addition to managing three other highly popular sites.

Fortunately, AMG services did not take the heart and soul out of the venue by converting it into a modern Hi-Tec music arena. Much of the charm and character of the building has been retained and visitors are treated to a spectacle of beautiful period features including splendid examples of art-deco styling and an impressive proscenium arch.

"We're happy to see this conversion. It's always been a charming venue, and it still is," said Editor Sarah Moore from the music blog.

The company’s prestigious Birmingham, Leeds, Newcastle, Leeds and Sheffield live music arenas regularly pull in big crowds in excess of 2000, with London’s Brixton Academy one of the best loved live music venues in the country, often filled to capacity with close to 5,000 live music fans.
The O2 Academy in Bournemouth may not be the UK’s largest venue, yet it hosts performances by some of the biggest names in music. The venue is also hugely popular for its club and dance nights with one of the biggest attractions being the unique setting.

The O2 Academy is located in a historic old theatre house constructed over a century ago in 1895. The venue has had an illustrious past and has been used as a music hall, stage for circus acts and dance music club, to name but a few of its incarnations over the years. The Academy Music Group acquired the historic Bournemouth Pavilion Theatre in 2009 and gave it a new lease of life as a state of the art live music venue, allowing a new generation of music lovers to see their favorite singers and bands play.

Many original features have been retained and the interior three-tier theatre now boasts a stunning central wooden dance floor and executive boxes, which are surrounded by ornate steel work and art deco styling in front of an ornate proscenium arch . When you add AMG services and top music it adds up to a winning package, which was enough to clinch the adjudicators at Best Bar None to give the award for the Best Entertainment Venue for 2013 to the Bournemouth O2 Academy.

The Best Bar None award scheme is a home office backed initiative which helps to promote professional and responsible operation of bars, clubs, live music venues and other alcohol licensed premises. Best Bar None was piloted in Manchester in 2003 with the aim of improving standards and raising the benchmark of businesses within the “night time” economy. The scheme was so successful that it has now been adopted in over 100 towns and cities in the UK.

The award tells visitors that the standards provided are excellent, that the venue adopts a responsible attitude regarding the consumption of alcohol and that it is professionally managed. Visitors can be sure that high safety standards will be adhered to and the staff will take the necessary steps to ensure that music can be enjoyed to the fullest.

Nikki Miles, Venue Manager at the O2 Academy Bournemouth was delighted with the award, which comes only four years after the company acquired the grade II listed building. It was dedicated to the efforts of the entire team for the professional attitude and the efforts which everyone puts in to each and every show.

For further information on the Bournemouth O2 Academy, visit http://www.academy-music-group.co.uk/

MusicLoversBlog.com is an independent news and opinion web site dedicated to the furthering the appreciation of music.