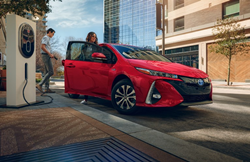 Alternatively fueled vehicles are beginning to become more common on California roadways. While plug-in electric hybrid cars like the 2021 Toyota Prius Prime still have a reserve of gasoline, they depend more on electricity than regular hybrid cars. Since many drivers have not yet had the ability to drive a plug-in hybrid electric vehicle before, Ammaar’s Toyota of Vacaville is promoting their stock of Toyota Prius Prime models.

At the time of this writing, there are two 2021 Toyota Prius Prime models available at the dealership. One belongs to the XLE trim and the other belongs to the Limited trim.

The 2021 Toyota Prius Prime XLE has a 1.8-liter engine, which generates 95 horsepower and 105 pound-feet of torque. The transmission for this vehicle is an electronically controlled continuously variable transmission and has front-wheel drive. It is colored in classic silver metallic and has a starting MSRP of $30,000.

The 2021 Toyota Prius Prime Limited has a starting MSRP of $34,000. It has more features than the XLE, including integrated LED fog lights and LED accent lights, intelligent clearance sonar, intelligent parking assist, blind-spot monitor, rear cross-traffic alert and a color head-up display. This model is painted with the magnetic gray metallic exterior.

Shoppers seeking to learn more about either of these models, or other hybrids at Ammaar’s Toyota of Vacaville are encouraged to call the dealership at (707) 446-7000 or visit the dealership at 500 Orange Drive, Vacaville, California, 95687 or by chatting with a representative through the chat function on the dealership website.